It's not Spring, it's "Combing Season"

I don't know what happened to all my cat combs. I guess the Comb Gremlin ate them, and I have three long-hair cats who require combing, in additional to the short-furred ones. I stopped by the Big Box pet stores, and all they had was crap for combs for dogs and cats. I hope it's just that they were out, because cute pink combs and brushes with short plastic-tipped bristles are not going to do much more than give a cat a massage. So Amazon, here we come. 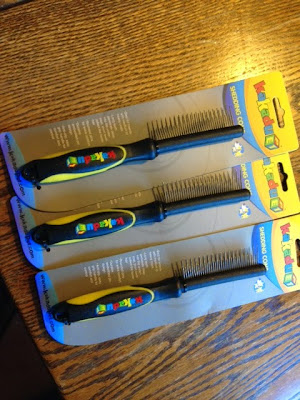 My veterinarian had this style at their office (in a more professional model) and it worked great of Grayson when he was there, so I picked up three. I'll shop for short-hair combs later. 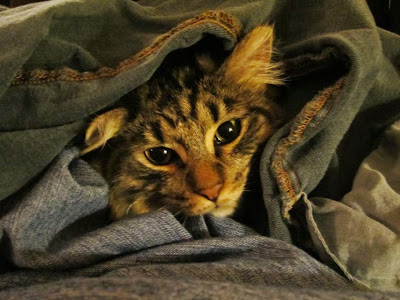 Seven grows even more--Checking in! 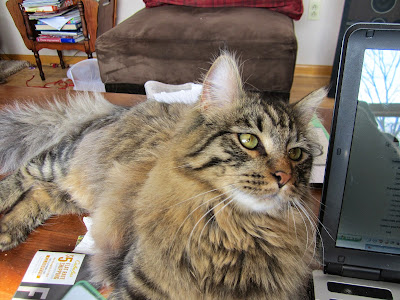 Mew (formerly Elsa, one of our two blind adoptees) checks in! 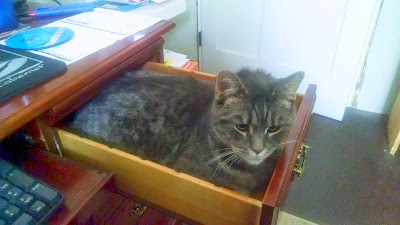 Elsa (now Mew) was the second blind cat that came into our care. Debra, from Waverly, rescued her (and also rescued little Oliver and a number of of other cats at The Owl House). Mew's housemates are bunnies! I need to ask for a Mew-and-house bunny photo! Here is video of Elsa when she first arrived here.

Elsa has a wonderful home north of Cortland. They will be visiting today, possibly to adopt another cat, although our numbers are pretty low at the moment, with only nine cats available, and some of those quite shy.

Look who is in the house 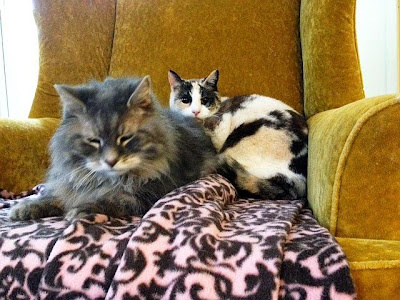 Fluffy (16-18 years old) and Pickles (14 years old) have moved into the house. Catching Pickles was a bit of an adventure, which ultimately involved a pillowcase, but they are both in the upstairs back bedroom. Then I'll let them into the whole upstairs, and then into the downstairs.

At 2am, Fluffy started howling. When I went up to visit them, he was by the door, asking to be let out. I can't imagine what is going through his mind after spending nearly all his life in the cat facility where he was king. I hope he likes it here.

Heidi and Lucy have moved from their run into the cat room, and Valentina and Robin moved from the house to the cat room as well. Valentina is in a cage in that room because Heidi was affronted by her presence, and poor Robin is putting up with the glares and hisses with fairly good spirits.

Previous Fluffy posts can be found here and here.

Jack and the Leewit check in!

Jack and the Leewit's guardians are amazing supporters of The Owl House. I always love when we receive photos of these two, because it is always clear that they are in charge of the household...and very loved. They always find such interesting places to show their charm. 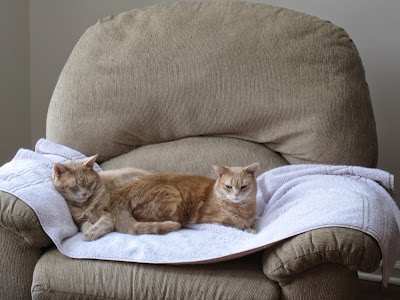 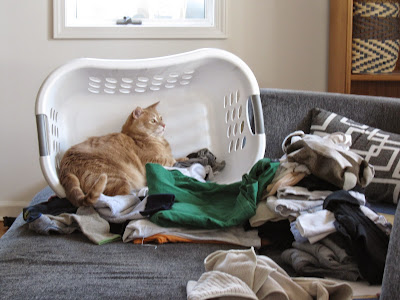 Dusty is adopted. Is your head spinning yet?

Yet another cat has been adopted! Dusty was quite happy to leave my company and move in with Jake, her new guardian. I had been dosing her twice daily with Clavomox, not to mention her pre-adoption vet visit, pre-adoption worming, and regular monthly Revolution application. Can you blame her for being somewhat pleased to leave my company? 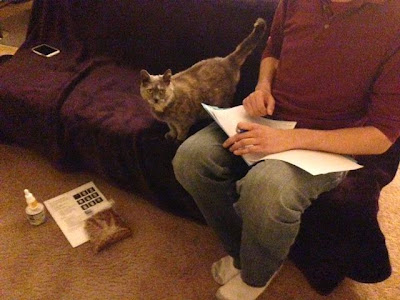 I think she'll be just fine. Of course, as with all of our cats, she is on her two-week trial. Still, look what greeted me on the wall of her new home when I delivered her. Clearly we have a cat lover here. And a beautiful piece of cat furniture (our current "adoption fee") was there for her to explore. 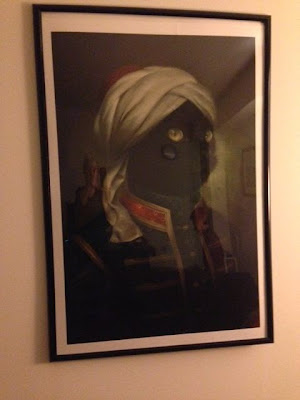 AND her new guardian had printed off instructions on how to get my rescue email on my iPhone.

I will need to let Dusty's previous guardian know she has found a place!

She loves this guy. She almost couldn't wait to see me go.

Oh well...that's how we like it. Good luck, Dusty! 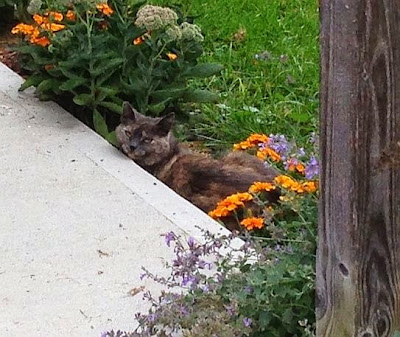 Yes, it is still winter here. But I am dreaming of spring. 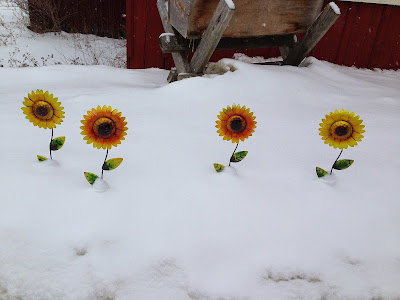 I'm planning a veggie garden that is larger than last year, which means I will have too much produce for just myself. I've also been offered some year-old hens, so I'm going to have chickens again, which means there will be eggs to sell and give away. So I've decided to put a farm stand out front again. Some of you may remember that my last stand was actually stolen (yes, someone took the actual stand!). I think they thought it was being given away for free one day when I had produce out with a "free" sign on it.

I will stake the next one down.

In the "haymow" of my barn--which has no hay--is this old cabinet that I plan to lower down, clean up, repair, and paint. I'm going to use this for the stand. I can close it up at the end of the day. Produce can go in the drawers, which I can pull out part way to display them. I'll need to build a bit of a "roof" so it is protected from rain, and I'll need to make sure it's up off the ground so it doesn't rot. 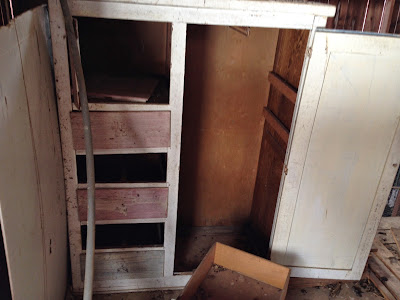 Getting it down from they haymow will be a bit of an adventure. I may install the "roof" and include some heavy-duty hooks or something similar so I can lower it down by rope with some help. I always wonder about the history of some of the things I find on this farm. How long has this cabinet been here? Why is it in the haymow, for goodness sake?

In addition to veggies, I also plan to put out some crafts, also made with scavenged farm-stuff. I have a zillion windows and window frames in the barn as well. I was at an antique store and saw this idea for a card display/wall hanging made from an old window frame and chicken wire (which I also have a ton of): 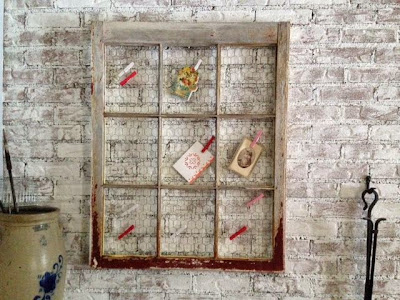 So I made that one (above). I'll make a few more, some with the original worn paint, and some painted fresh, and then see if they actually sell before putting in the effort of making more. I also have smaller window frames I can use. 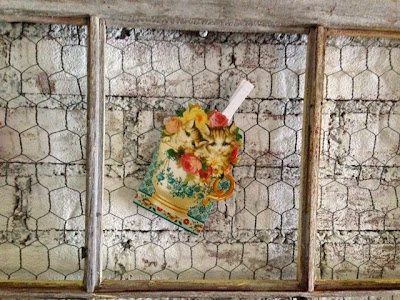 I don't expect I'll make much, but it's something that I can do with the extras I have around here. I'm off the beaten path so not a lot of people drive by. Once I have eggs, I'll put a sign out on Halsey Valley Road. One thing people will turn the corner for is farm eggs, and hopefully they will then purchase some of the produce.

Yesterday (Sunday) was the Spencer-Van Etten Community Fair. I woke to more snow falling, which was a bummer because of course the crowd would be thinner if the roads stayed slippery (and they did)

We weren't the only rescue there. Angel Eyes and New Beginning were both here with booths. Angel Eyes had these awesome fuzzy socks (and my family knows I love fuzzy socks) two pair for a dollar, so I spent $2 and have four sets to keep my toes toasty for the rest of this long, long winter. 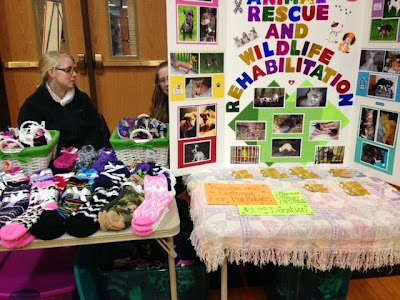 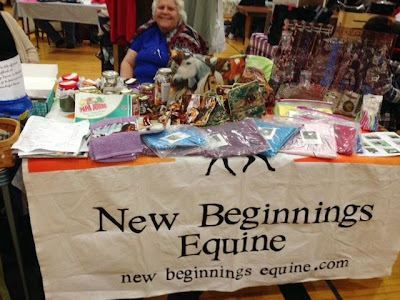 I've gotten very tired of hanging a rolled-up banner in front of my table. It always has to be reverse-rolled to hang flat, and requires tape, and always sags despite my best intentions. So when VistaPrint rolled out one of their 50% off sales I purchased a new banner with a stand, and what an improvement that is! It takes up more room, but it's up at eye level, much easier to read, and much easier to put up and take down. 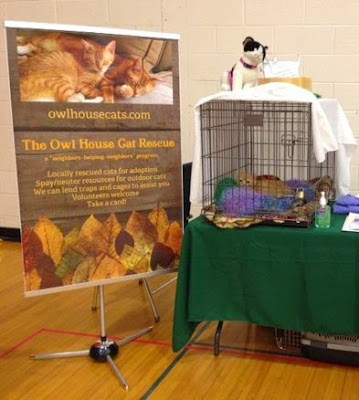 Poor Oliver didn't think much of the PA system used to announce raffle winners. I need to make sure next year I bring a bomb-proof cat or, if we don't have one, no cat at all. Having a cat really brings people over, but it is a pretty loud venue.

I put a padlock on his cage and covered him up for about 10 minutes so I could take a walkabout, and I found these teacups for five bucks. I am a coffee drinker (I love tea, but drink coffee more often) however most of the people who visit here are tea drinkers and I only have mugs to serve tea in. I've been watching for sturdy vintage tea cups for a long while. All I have found are very delicate cups which understandably don't fit my lifestyle (they wouldn't survive long). So now I have tea cups and saucers for my visitors! Come on over, tea drinkers!

I could have purchased four more for another five bucks, but the chances of me having eight people to tea are pretty much zero. 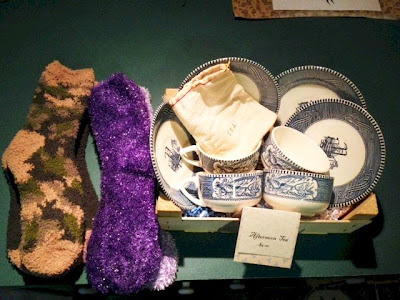 We received about $40 in donations which will just cover the office visit fee for Dusty's vet visit, so thank you to all the people who visited the booth!

Stolen from Facebook: Siggy and TigerTom check in from Endicott 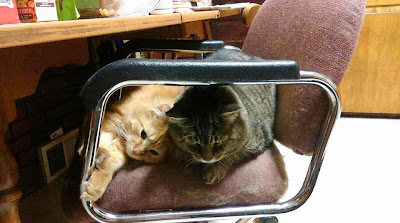 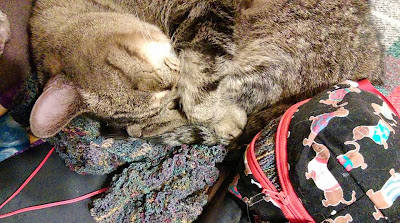