With drop-offs and legitimate cats-in-need, the ratio of feline to human here has gotten alarmingly high. While I have definitely had a greater number of cats in the past, it normally was in the summer, not winter. While I normally don't do "Coffee and Kittens" this time of year, I felt it was time to pull my head out of the sand and get to moving some cats into homes.

Siggy will be going to Johnson City to live with Tiger Tom's family! Tiger Tom is our one and only viral cat (in an internet sense of the word). 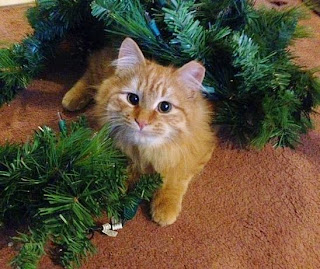 Nueve will be going to Ithaca to live with two poets. One is a beloved professor of mine from college. They adopted two kittens from us many years ago. 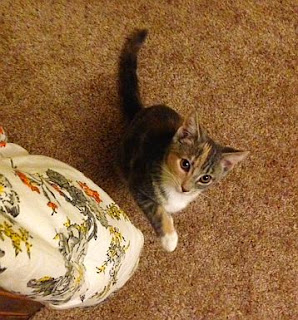 And joy of joys, Bo and Davis were chosen, and will be adopted together to a home here in Spencer! 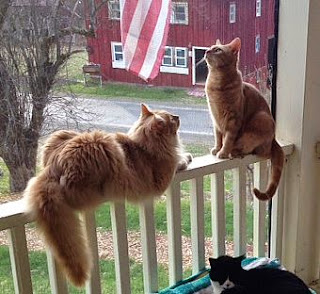 They all need healthy pet checks at the veterinarian, which unfortunately slows things down. Tomorrow Brody (a young cat from Waverly) and Robin (one of the feral kittens) are off to get neutered, so Nueve is piggy-backing on their visit for a second FeLV/FIV test and then she can go home.

I have no certification of rabies on Siggy and his caretaker is camping for Winter Break so unfortunately he will need to be re-vaccinated. Bo and Davis need a good solid exam, follow-up FeLV/FIV and rabies, since they are 2.5 years old.

The best part of all of this is that Fluffy can come into the house after sixteen years as the cat facility mascot! He should also have a veterinarian's visit. I'll probably start him out in the Great Room. I want to introduce Bear and Fluffy gently, since there will then be two "big old men" in the house. Bear did fine with Ivan, so I hope Fluffy will be accepted without a problem.

Now we need to get Pitter and Patter a home. I'm going to start shutting them in a room upstairs at night so they get used to it, and can be made more accessible when people visit. They made themselves scarce during this event.

I also managed to get video of some of the cat facility cats and hopefully can get that posted for people who wish to see it. So much to do...so little time!
1 comment:

Someone has been making cryptic posts on Craigslist telling people to check out our web site. They don't say anything else. The same person (or is it two people? One anti-TNR and one pro-TNR?) has been posting all sorts of short statements against Trap/Neuter/Return, letting your cat outdoors, giving kittens away etc. I've emailed nicely in response to the anti-TNR posts and received no reply.

Unfortunately, due to this--or the fact that shelters in our area are all turning away cats (more on that later)--at least four cats have been dumped in my area: two young black cats with white on Halsey Valley, who cried at me and then took off at a dead run when I tried to help them, and an adult cat and a kitten dumped here in front of my barn who I only know exist due to their tracks: 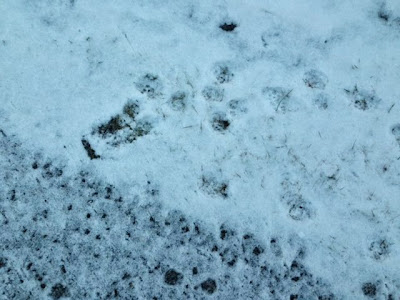 You can see how the kitten was probably handed out of a car door and landed in the snow. 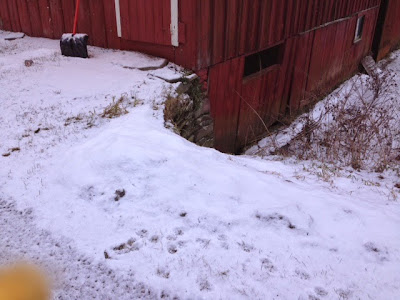 Right by the barn door. Unthinking people somehow assume the cats they abandon will just run and take shelter in the barn where they dumped them. They usually don't. They run in confusion, or they huddle down in the nearest wad of high grass.

This kitten ambled about in confusion for a bit: 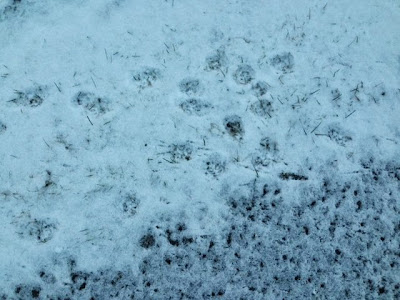 And then began to trot away: 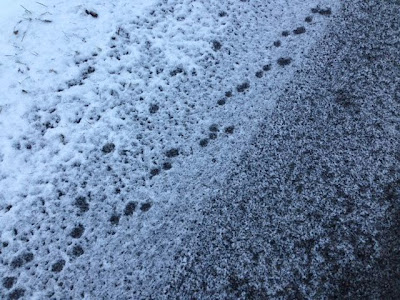 This is what the kitten was heading into: 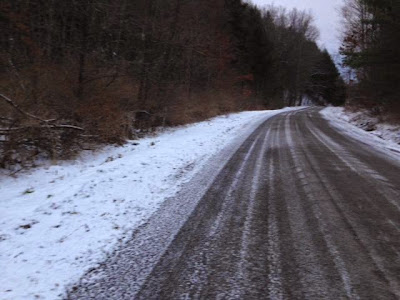 And this is where I finally could no longer find tracks, looking back toward my barn: 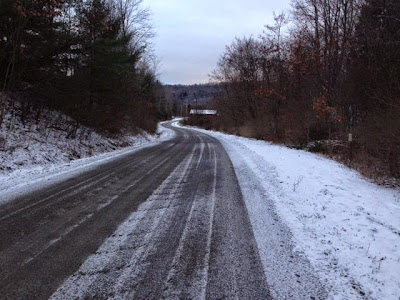 I've put food in the barn, but I don't have much hope that a kitten that small (the tracks were tiny) is somehow going to turn around and retrace her steps. I'm hoping someone saw her and picked her up, although I did not see any human tracks where a car would have stopped and person had gotten out, when I lost the kitten tracks.

Somewhere some person is relieved they no longer have to worry about the cats they didn't want. Instead, now I am sitting inside in the warm, thinking of cold abandoned kittens every night as the temperature drops. I'm scanning the fields for the first two kittens, and driving the back way at night looking for eye-shine for the second one.

The adult cat may have found my barn. Or perhaps the tracks I see now belong to Bandit, the next-door cat. I'm setting some traps and we'll see who we catch.

I'm sorry to share a downer posts, but I plan to post a link on Craiglist so people can see what actually happens when cats and kittens are abandoned at farms.

This is why I never criticize people who post kittens and other pets on Craigslist. At least they aren't dumping them in the snow, as so many other people do.
2 comments:

It's all the rage to take old furniture and turn it into something re-purposed as cheaply as possible.

I've been looking for something attractive for the cats to sleep on in front of the woodstove. Something on legs, and cushy, so it would be easy to vacuum around, and light enough to pull back to bring in wood. I've looked online for benches, but the price they ask for something that is still pretty small and likely hard as a rock was far too high. I gave up looking long ago.

I was in Waverly this past weekend and stopped by the Crooked River Co-op to wander through their unheated section where the "new" old stuff is kept, and there was my bench. Cheap as heck, far bigger than anything online, and the cushion was ugly but SOFT. I carried it to the car with one hand. 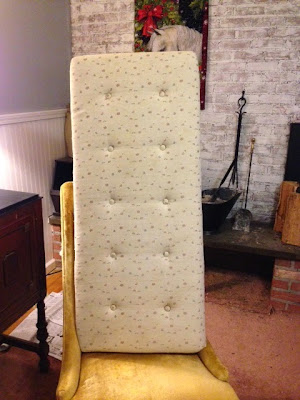 I brought it home and picked up one of those plush throws that are on sale now due to Christmas. I painted it black with chalk paint (not chalkBOARD paint) that I already had on hand, and recovered it with half of the throw (I'll save the other half for the future re-covering I'm sure it will need in 6 months to a year). Rose was up here within about five minutes of completion. The whole project, including painting, only took about 2 hours. The paint requires no priming or sanding, and dries very quickly (especially near a woodstove). 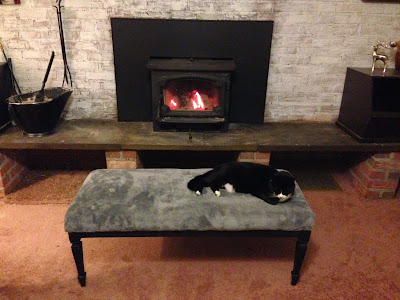 Hopefully the cats will share, so at least two can be up there at a time to bask.
No comments:

Siggy's surgery, thanks to SPCA of TC and Cornell Shelter Medicine program

Siggy is lacking a leg, and seems not to miss it, after the SPCA of Tompkins County reached out to the Maddie's Shelter Medicine Program at Cornell University and arranged for his amputation. I was going to be traveling for work, however I dropped him off the morning of his surgery. It had snowed all of the day and night before. I trudged out at 1 a.m. to clean off and de-ice the car, and clear the driveway, to be sure I could get out the next morning at 7 a.m. 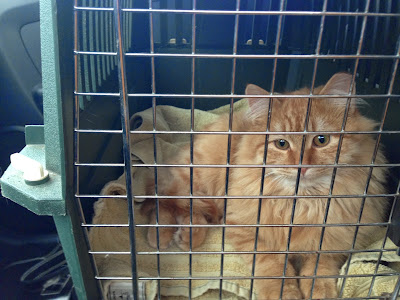 He was totally laid back during the 45 minute trip.

Nancy picked him up afterward and is fostering him until he recovers. We still aren't sure if he's going into the SPCA of TC adoption program or staying with us, but either way feel free to email me if you are interested in giving him a home. He's great with other cats, and we will test him with dogs soon, as Nancy has cat-friendly big dogs who can take a sniff at him.

Thank-you to Tiger Tom's mom for a donation toward his initial bill for the emergency visit for a radiograph and combo testing at our veterinarian! And additional thanks to Nancy for picking him up and caring for him as he recovers! 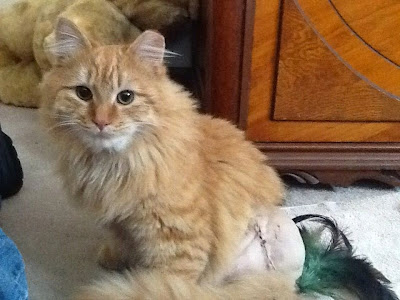 My winter travel is over. The last ten days have included trips to Los Angeles and Tampa for work, where no, it was not particularly warm, and yes, I was quite jet-lagged when it was all over, and while I definitely enjoy getting out of my little box in Spencer NY and meeting great new people, I'm glad to be home for awhile!


No snow, but there was still plenty of Christmas cheer at the marina in LA: 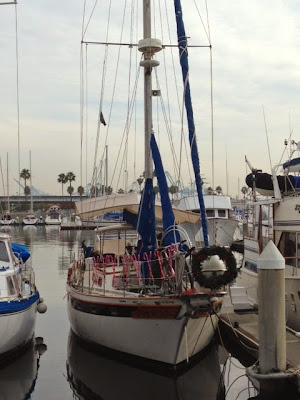 And while I spent the majority of my Tampa trip in a hotel or conference room, we did arrange for dinner near the water and sprinted over to the beach just to say we had been there: 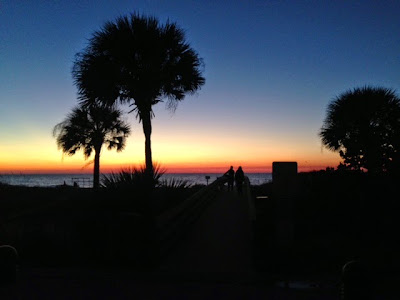