The Brothers, Bo and Davis 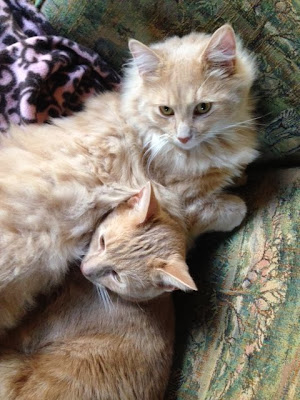 Bo and Davis need a home. I never call them by name, because I always call them together. I call them "Brother." "Hey, Brothers, where are you?" Perhaps they are Brother One and Brother Two (like "Thing 1" and "Thing 2" of Dr. Seuss fame). I have let them join the downstairs clan and they are perfect gentleman. They do not scream for wet food. They politely wait their turn at the morning wet-food feast. They are very quiet, although sometimes Davis, the longhair brother, will sing for attention. They are both gorgeous, and have the most expressive faces. And they love one another, so they must go together. They are shy, so I fear that they would take an even longer time to acclimatize to a new home along. Longhair Davis would probably be OK. But Bo would be lost without his brother or another similarly sweet cat.

However, they are falling in love with me (they could easily fall in love with someone else). They want to sit on my lap; to sleep in the bed. They are very sweet and unobtrusive. But there is only room for two cats in the bed, and those two must be Cricket and Ivan, my seniors, who would be highly offended to discover their places taken by young newcomers.

Here is Davis, showing off his gorgeous self:

Kittens go to the vet! 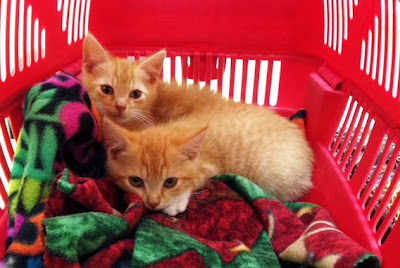 And they are FeLV/FIV negative. Whew! When I catch kittens myself and can see the general health of the colony around them, or I know the colony is fairly isolated (and therefore less likely to carry these cat-to-cat diseases) I'm usually less worried about a test outcome. But when they are dumped, you don't know where they came from and the test is a total toss-up.

Cricket and Ivan are getting up there in years, but neither one is content to remain on the floor. Ivan insist he will sleep with me. Cricket insists she will go wherever she went when she was a kitten, despite the fact that she's missing a leg and her remaining back leg is full of arthritis.

Both have hit the floor unexpectedly multiple times.

A long while ago I added steps to the bow window where their cat food was (once) kept safely from the dog. Of course, the dog can climb the steps as easily as the cats, so there's no real benefit to having the food elevated, but habit is habit, so there you go. 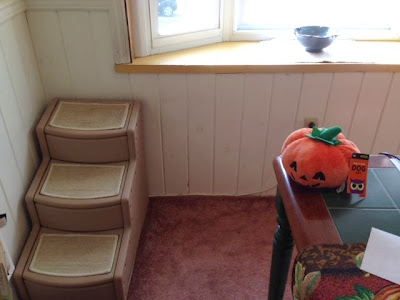 Plastic steps cost money, however, and really aren't that attractive. Cricket is good at latching her front claws into anything and hauling herself up. But when Ivan leaps and misses, he just plain...misses...and topples back over to the hard floor.

So I've learned to improvise. I have two antique suitcases--one confirmed to have been made by my grandfather and used when he and my grandmother came over from Germany, and a larger trunk that is enough alike as to be it's twin, which I found in an antique store in Geneva where they once lived. The antique guy would say only that he got it "at a recent estate sale" and refused to say where or when. So the low suitcase and the taller chest now make an attractive step-up to the chaise and the window seat. They also hold my wrapping paper and small gifts I find over the course of the year and save for Christmas. 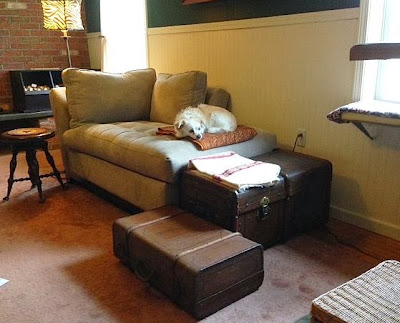 Ivan has slept by my chest every single day and only rarely chooses another spot. The bed is far too high for him to make a successful leap from the floor, so I paid something like five bucks for a pink ottoman, recovered it in some tapestry fabric I found at a sale for a buck (many many yards of it...of cats), and set it beside the bed. Problem solved, and no unsightly cat steps. However steps or an additional step-up may be needed down the road if he gets even more feeble. 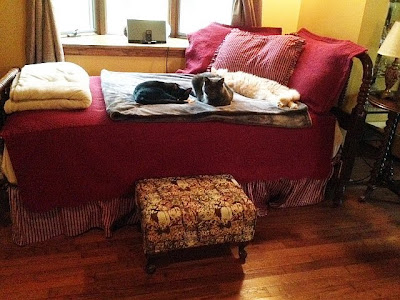 I constantly keep my eyes out at garage sales and on Craigslist for small, attractive items I might use for a combination step-up and side stand. Small ottomans (which are often antique/vintage) are often as pricey as brand-new cat steps, but sometimes people just want them gone, and don't realize what they are selling for $5 someone else might sell for $30-50. However, most of the ottomans on Craigslist are the great big huge ones that are the same height as the couch or chair they originally accompanied, and aren't suitable as a step-up.

I have found that ramps, unless they are not very steep at all, don't work so well for feeble cats. I'm going to have to replace the ramp up to the window that goes to the catio with handmade steps. Ivan and Cricket both insist on using the ramp and find it very difficult to hitch themselves up. I added small wood strips to give them something to get additional purchase on, and to keep them from sliding down headfirst when they leave the catio, but it's still pretty difficult for them to haul their way up the incline.

Has anyone here come up with inventive ways to get their oldsters where they wish to go?
3 comments:

Kittens are doing great so far! 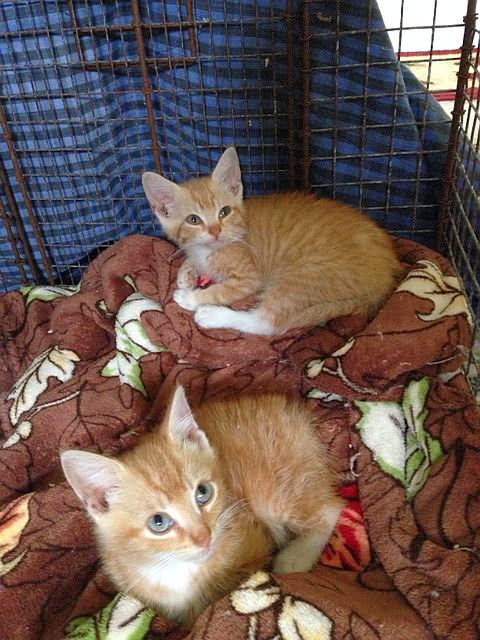 The kittens are doing great. They are eating well and all of the plumbing works. They are still quite shy, but when they are hungry they come to the front of the cage and beg for breakfast, so I don't think it will be long before they are fully socialized.

I need to get these little guys (actually, one "guy" and one "girl") spoken for as soon as they are FeLV/FIV tested. I can't afford to be stuck with them past their "cute and fuzzy" stage since I plan on renting the upstairs soon. But in the meantime, I'm enjoying their furry cuteness, and I feel somewhat better that at least these two survived, even if their little brother met his end via a car. I still am astonished at their survival.
3 comments:

We are feeling better, thank you! 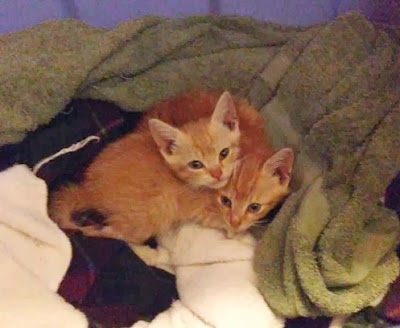 I am shocked and amazed. I really thought these little guys were goners, and their steady improvement was a wonder to watch. This morning I took the top off the bin (it was of course propped open a little way for air circulation)and they were both there staring at me. While I fed one kitten, the other surprised me by popping right out of the box and running behind the washing machine. He ultimately came out on his own, crying for breakfast. We are taking it very slow, but things are looking up!
5 comments:

Sunday I came across a small orange kitten that had been hit by a car and killed on Owl Creek Road. He was obviously abandoned, and I wondered where his siblings had been dumped. For some reason people who dump kittens tend to dribble them out along the countryside instead of putting them all in one place (although I have encountered full litters before). I called and called alongside the road, in case he was not alone, but I didn't find any others. That night it poured, and I hoped no other kittens were out there in the dreadful weather.

Tonight I heard Molly growling at the door and I went to look out, wondering if the bear was abroad. I ended up screaming (yes I did!) at the dark shape right at my screen door. Thankfully, the shape was human..a neighbor up the hill who came seeking advice for some kittens another person had brought to her door, having found them in the road. She had gone to the Dollar General and the young clerk there had told her about me. I told her to bring the kittens on over, so she went home and got them. They were in dire shape. They likely had spent at least three days without food, being soaked and scared. I told their rescuer that I did not expect them to live the night, but so far they are doing better. They were cold so we heated them up with SnuggleSafes and a hairdryer. Some warm subcutaneous fluids, and some warm towels in a Rubbermaid container... I even had Pedialyte, once they were warm and hydrated. After about four hours they got very restless so I mixed up some very diluted KMR and they each had a half ounce. They are still very twitchy but are far more aware than they were. I still have reservations about their chance of survival, but I had to try.

So a wonderfully dedicated Google expert/volunteer was able to point out one link that I had missed in my template to the site hosting malware, and the blog is now back and links are safe to click on. I suppose I should be thankful that Google/Chrome puts up those warnings, otherwise I might never have known. I wish their web master tools were a bit clearer about what to do if the malware isn't actually on your site, but luckily there was a lady (I think) in white hat to save me.

The internet is an amazing place.