On the road with spay/neuter

What we TRY to do with the American Cat Project, is fix cats (not shelter and adopt cats out). When I first started working with a national website that helped adoption groups, TNR was new. At that time, we did phone interviews of every new member. Every week a new TNR member would join, and inevitably they said "We were told that all we had to do was spay/neuter with TNR, but we've found we always have friendly cats or kittens that shouldn't be put back, who need homes, so we need to post them for adoption."

They were always a bit shell-shocked that TNR often meant becoming a small pseudo-shelter. Some groups were lucky enough to have good contacts with actual shelters, and could turn socialized kittens over to the shelter. But 15 years ago, many TNR projects were started because the local shelter was so overwhelmed they simply didn't have room.

(The change of TNR over the years is a topic for another post. Sentiment has very recently swung toward returning almost every healthy cat -- even friendly ones -- with "return to field" or "shelter/neuter/return." I don't agree with this practice except in large municipalities who are so swamped with cats they can't get ahead without this emergency practice --I would argue short-term for 10 years or less.  But...didn't I say that was for another post?)

So what the traditional view of TNR often requires, to save on gas and time for all parties involved, iis "cat smuggling" in parking lots.

It's NOT cat smuggling, but it often feels that way, as you swap cats back and forth in carriers while nearby people look at you in curiosity. After an initial site visit, the caretaker and TNR group find a halfway point, meet in a parking lot, and the cats are transferred from car to car so one person isn't spending hours and gas on very long drives.

Most recently, my rendezvous point for a Chemung County colony has been Sportsman's Warehouse. It's clearly a building that's hard to miss, and the parking lot is a reasonable size so caretaker and rescuer can spot one another. Although this week the caretaker's truck was hidden behind a huge bank of plowed snow, so it took awhile for me to track him down. 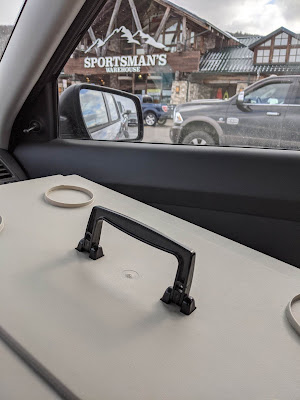 The cats then come back with the rescue, spend a night or two, are driven by the rescue to their spay/neuter appointment, are picked up and recovered for a few days, and then it's back to swapping the cats back to their caretaker in the parking lot. So there's still a lot of driving for the rescuer, but at least the caretaker/rescuer swap shaves a few miles and hours off. 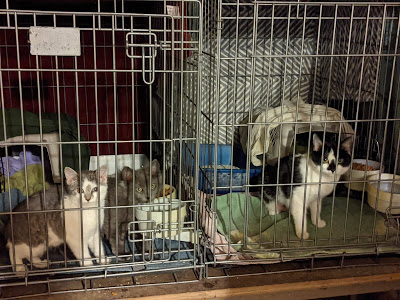 In this case, the colony caretaker has agreed to pay for half of any spay/neuter we have to pay for, and we cover the rest. Sometimes we cover it all. Sometimes we are surprised and pleased to have the caretaker, or often neighbors who hear about the spay/neuter project, cover the entire cost and more.
With our program, we require the caretaker to call as soon as any new cats show up, to head off another population explosion. No one wants to go through all this a second time.
These three youngsters, Gigi, Guy (who turned out to be a girl) and BN, are safely back from affordable spay/neuter at the Humane Society of Schuyler County, one of our lifesaver shelters 35 minutes away, and they will be going home on New Year's Day.
They are the very last kittens at their colony. So Happy New Year to us! 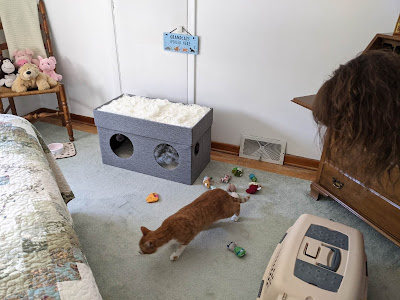 Emmett and Eveline (now Gracie) went to their new home in the Binghamton area this past week. I try to say my goodbyes before I crate them up, because when they are released in their new safe room, they tend to head straight under the bed and there's no chance for a cuddle. Most safe rooms are a guest room or the new guardian's bedroom.

Sometimes I forget to say goodbye when I pack them up, and it's always somewhat bittersweet when I leave them behind.

Emmett surprised me by checking things out first (how could he resist all that cool cat stuff?) but soon joined Gracie in the usual kitty safe spot. Kim, their new guardian, and a previous adopter (Tyler, a Russian blue type cat who was a close buddy of mine when he was growing up), sent an update:

"Emmett and Gracie have full run of the upstairs when I am home and then just their room when I am not. I sleep in the other room upstairs and wake up to find both of them under my bed. I learned that    Emmett can be had for treats so while he is still not all in on pets he will come right up to me, show me his belly and talk to me. Gracie loves to sleep under the comforter so I lift it up, give her pets and talk to her then leave her be. She doesn't move so that is good. Tyler has seen them both through the gate. There has been a little hissing but no hair up and neither Emmett or Gracie seemed  impressed so I think that is just him being nervous. They are all very curious about each other."

It's always a bit interesting to see how cats act in their new home. Kim chose both Gracie and Emmett so that Emmett would have a brave cat to pull him out of his shell. But in the new home, Emmett is the brave boy and Gracie is cuddling under the comforter.

If only they could talk to let us know how they really feel, because just watching cat behavior in their first home (here at the Owl House) just doesn't really give a good window into how they'll act when they move on to their next chapter of life.

Here's video of the beginning of their journey when they were being trapped! SO cute.

I'm guessing I'm not the only one who is feeling somewhat bogged down lately. I've been shaking my head a bit over all the "let's get 2020 over with" chatter and memes - mostly because, of course, nothing magical is going to happen on January 2021. COVID isn't going to go away. Politics aren't going to magically be perfect. Bills won't magically be paid. Oddly, this actually gives me a bit of a brighter outlook. I'd rather slowly and hopefully build toward a new normal (hoping for that vaccine!) than expect some amazingly brighter future after a New Year's Eve countdown, only to be disappointed. Does that sound gloomy? I don't mean it to.

This Christmas had some weather gremlins. We got socked with 34" of snow. It took five days to shovel out, all the while knowing that on Christmas day the temperature would skyrocket and rain would come. It would be tempting to let it all melt on it's own, but immediately after that they were predicting freezing cold temps again...which means neglected snow could turn into frozen chunks.

So...shovel and shovel some more. It could have been worse -- I could be the dedicated FedEx guy who still managed to get my Chewy shipment to me and had to drive through all that bad weather. 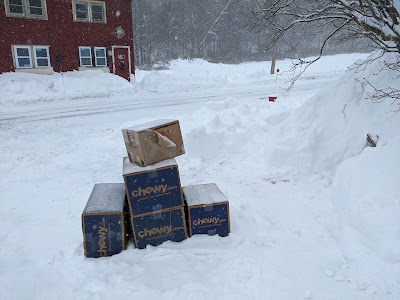 But I couldn't shovel my barn roof.  So 2020 had one more unpleasant surprise for me: 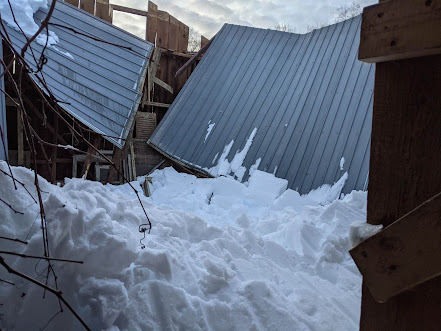 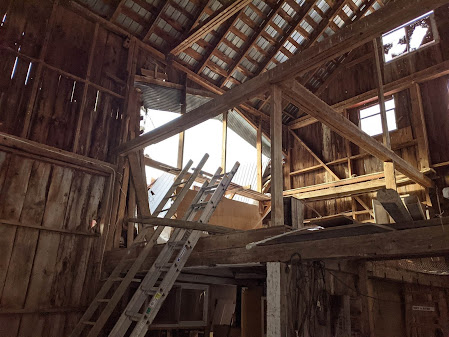 The roof over the woodshop on my barn couldn't handle the snow load, especially after the snow from the main barn (where the cats used to live) slid down on top of it.

The more expensive tools were safe. Luckily I'd been slowly removing anything valuable from the second floor over time, so the only thing destroyed are piles of old windows. A big stack of valuable 10"x12' boards were buried in debris, but I'll worry about that in the spring.

At first I figured I'd just tear down the whole thing. Then it occurred to me that if the first floor roof (the floor of the second floor that's buried in all that snow) is strong enough, maybe I'll just tear off the second floor walls, clear out the debris, put a flat roof on down, and build a railed deck that looks out over the creek. That may actually be the cheapest option.

Spring will tell. There's nothing much I can do now, unless I find someone who doesn't mind clearing out all that debris and cutting down the broken walls in the cold weather. If the snow melts and the ground freezes so a truck can be driven out there, I might be able to locate someone who won't charge an arm and a leg.

What other surprises will 2020 bring? And what new ones will 2021 startle us with?