Note: This is a post that has been sitting in draft for about a month! I have finally had time to complete it.

A few months ago I received a small personal-size envelope at my PO Box asking for help. A woman had had cats dropped off two summers ago and last year kittens had been born. She currently had 13 outdoor cats in various stages of approachability. These were not "community cats"...these were now her own cats, whom she had names, sheltered, and cared for. The cats needed to be spay/neutered. She was willing to help, but she couldn't shoulder the entire cost. 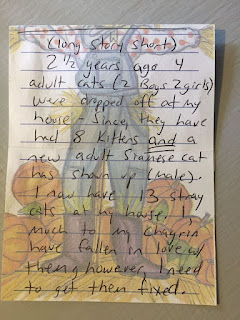 At the time I got her letter, I was over my head with cats who needed veterinary care. Rose (in her foster-to-adopt home) still needed follow-up blood work and her dental to remove an old root. Noah, a senior cat still her in our facility, badly needed a dental (and of course, blood work). Two cats had been adopted (Pierre and Dixie) and needed pre-adoption vet visits. Eve needed to be spayed. I couldn't see how I was going to squeeze 13 more spays and neuters into the rescue budget before more kittens were born in this woman's yard. The note sat on my counter for a couple of weeks before I finally picked up the phone and called her.

It took a supreme act of courage on my part, because once I speak to someone on the phone, I'm a goner. I do most of my initial correspondence by email. Sometimes I have to say "no" (or you'd find me featured on a hoarding TV show, or in bankruptcy court) and it's easier to offer people alternatives or a timeline via email.

As luck (and good will from Pam at the SPCA of TC) would have it, the SPCA of Tompkins County had spay/neuter spaces, and a grant that brought the cost down waaaaay low. They were able to give me spots in twos and threes. Without their help there is no way this location could have been handled so quickly.

The owner was willing to do the trapping for those cats who were too shy to be pushed into a cat crate, and even transport them here and pick them up. So off to work we went.

The first three caught were females (yay)! They were neat little ladies in their cages which was a big plus. There's nothing worse than dealing with trashed cages every morning when the cages are full of scared cats. 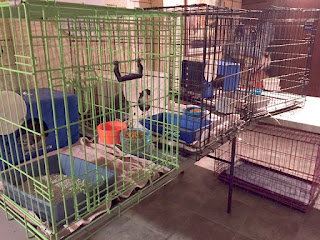 The second three were males and they were almost as neat as the ladies of their colony. The owner caught two more females trying to get the males, so those two stayed here at the Owl House in big cages, waiting for the next girl-spots to open up the following week. "Do not" I told the landowner "release ANY cats once you have caught them." Released cats can sometimes be difficult to catch again right away.

In addition to doing a lot of work, the owner also brought supplies for the cats and a donation as well. She is also going to send a donation to the SPCA of TC. I find that people often want to contribute to help solve a problem they find themselves in...they just can't afford it all in one swat. And 13 cats is a heck of a swat!

All this has meant a lot of driving:

Cats to and from the SPCA in the morning and again in the evening: 120 miles/day times five clinics (600 miles!)
Pierre to Syracuse to his new home: 128 miles
Dixie to PA to her new home: 110 miles
Rose to and from Sayre PA, four times x 60 for her dental visits: 240 miles
Not to mention the vet trips for Dixie, Rose, Solo, and Noah.

It's a good thing the Kitty Kia gets good mileage and the SPCA intakes clinic cats at 7:00 am and releases them after 6:00 pm so I could work around my job!

These cats also have a beautiful spot up on the hill. For privacy reasons I won't post the actual little house there. 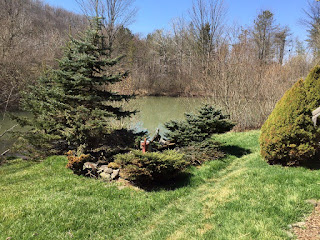 The three final cats were not interested in going into the traps, but that's when we pull out the big gun: a drop trap. 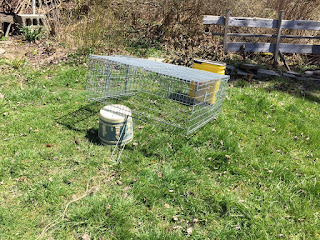 The landowner caught all three hard-to-catch cats in the drop trap the first morning she used it. This is "Gimpy" the very last cat captured. Her owner thought she would actually be the easiest to catch, as she has a deformed from leg that causes her to limp. However it appears her disability has caused her to develop great survival skills, because she was the final holdout. 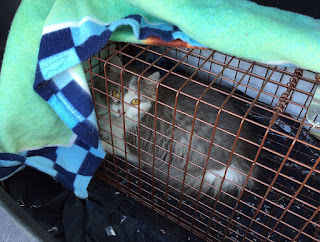 Basically I just did training, a lot of cage cleaning and swapping cats in and out of cages and traps, a lot of driving, and provided the equipment. The females stayed here for 7 days after surgery, as I prefer that females be entirely healed before release. The owner did the rest of the work. Is it any wonder I took advantage of this situation to train this highly competent woman to take care of the Owl House foster cats when I'm traveling? She had her first "go" at this last week, with my regular caretakers doing Friday and Monday, and she did the weekend. Everything went great.

Which just goes to show, good deeds sometimes work out just as well to the giver as it does for the one who asked for help. She has 13 fixed cats, and I got some wonderful interaction and help from the SPCA of Tompkins County, another caretaker for my cats when I travel, and maybe even someone to sit on the porch and gab with this summer, now and then.

Buster bonds with the indoor cats

Buster has been more of a presence around the house now that the weather is warmer. I'm hoping he will allow me to let him in the house at some point, but he still runs off if I come out when he is on the porch. He had no curiosity about being petted when I had him caged at the time of his neuter when he showed up here.

However he has come a long way with the other cats since the day he beat the tar out of my one indoor-outdoor cat Bear. Apparently his tom-cat hormones have finally subsided. Now he and Bear tolerate one another in the yard, and Buster enjoys hanging near the catio with the other cats.