So I mentioned I'd sold my huge old sideboard that had been given me by a good hearted neighbor years back. 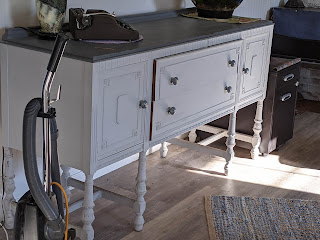 A local couple who buys and repaints furniture bought and repainted it. Here it is three days later: 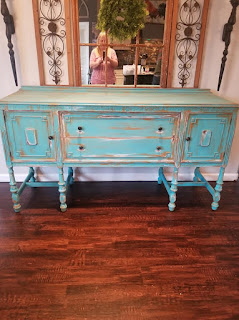 It'll sell for hundreds of dollars, I'm sure, down in Chandler's Market in Sayre. I knew when I sold it for $35 that it would ultimately be sold for a lot more because this type of furniture, chalk painted, is all the rage now in modern "farmhouses." It takes a lot of paint and skill to change a piece of furniture like this (for example, the refurbisher painted the inside, not just the outside as I did), and this took three coats of paint in different colors to get this effect, and I'd just slapped one coat on when I had it. I just don't have the energy or flair to complete re-do furniture for other people. I only do the minimum possible to make it acceptable in my own.

Anyway, it's on to a new life and it was fun to watch it's transformation on the new owner's Facebook page. And I have a TON more room in my house.

I've talked to a couple of friends who are experiencing the same ailment. Here we are at home, so you'd think we'd get more done. But due to...what? Angst over the elections? Tons of snow? Isolation doldrums? Who knows. It's not getting done. It helps to know I'm not alone, but it's been dragging us all down.

I've finally taken some steps to get my butt in gear. I hope I can keep the momentum going.

Since the screen door on the stairs was added years ago, the screen has been getting more and more shabby. I sort of tacked a piece of wood at the left because the door was too small for the opening and I needed to attach a hook-and-eye. Of course, one hook-and-eye wasn't enough for cats intent on getting downstairs, so I added two. Plus one on the inside. It looked like hell (IMO) to visitors, and of course was difficult to explain how to latch as I led people upstairs and they were left to secure the door behind them.  Two years ago I bought a new door and a door knob, but the bears destroyed my porch, and I used that door to replace the one they'd smashed to bits.

So a few nights ago I pulled down the old door, ripped off the screen, attached plastic hardware cloth that I'd purchased on Amazon, and installed the sitting-in-a-closet-for-two-years door knob kit. I also purchased some wooden ornamentation for the corners, to keep me from splurging on a fancy new door (the bones on this one were just fine). I got a new piece of wood for the door frame instead of the mismatched thing I'd had tacked up. Now people can go up and downstairs without wondering how the heck to open and secure the door. And it doesn't look a total mess. I can't begin to tell you how much joy I get out of opening and closing this door with a simple knob instead of messing with hooks on both sides. 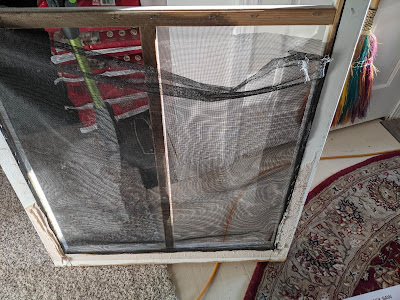 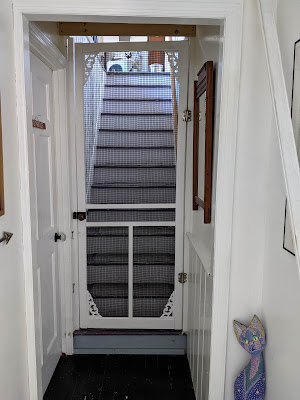 I had some help from Mocha who didn't seem to understand that he was doing an "if it fits, it sits" in a contraption meant to cut things in half. 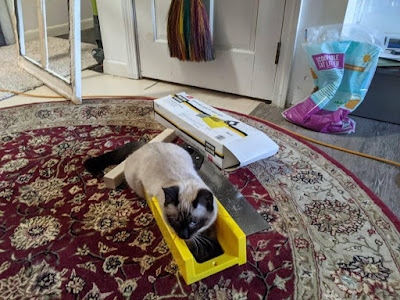 Then the front storm door blew off the hinges in a gust of wind earlier this winter, so I ordered a new one from Home Depot (the cheapest brown one available, because I was damned if I'd be scrubbing dirty fingerprints off a white door before every visitor arrived again). It barely fit in the car, and it was a pain to put up (thank you, YouTube!), but now that's done as well. There was quite a bit of swearing involved, and I really hope no one was enjoying a country walk at the same time as I was exercising my vocabulary. 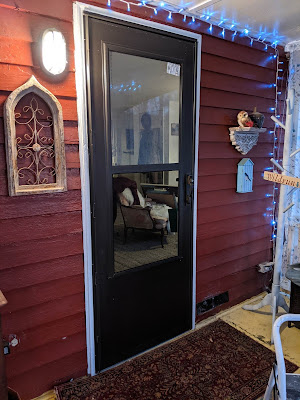 A few years back, a neighbor renovated their kitchen and gave me the vintage furniture they'd been using as a pseudo-kitchen until then. I chalk-painted it up and it's been hugely helpful. But one of the sideboards is absolutely huge (72" long) and the amount of storage it provided in return for the space it took up was insubstantial. For about a year the room it's been in has seemed more like a repository of extra furniture than an actual room I could hang out in.  I put the sideboard up on Facebook Marketplace for the cost of the paint and knobs I put on it ($30) (since it had been given to me for free) and quickly got a taker. 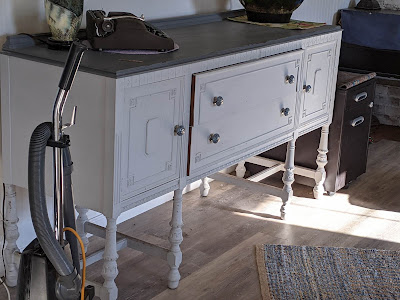 To replace it, I picked up a beat-up but sturdy dresser at the Re-Use Center in Ithaca, and threw some chalk paint, wallpaper, and Mod Podge at it. I already had the supplies. So I have as much room, but I can put the dresser along a small wall instead of it taking up the entire length of the room. 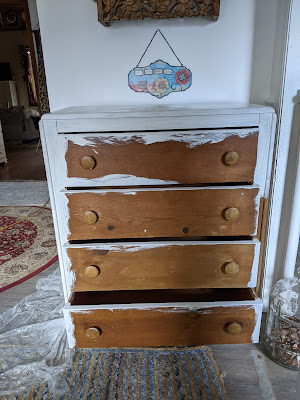 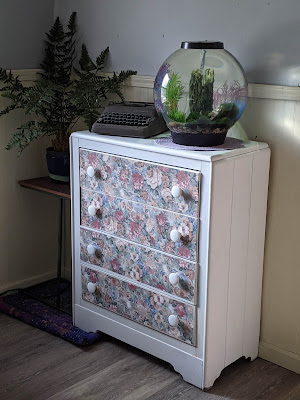 Now the couch, which was literally sitting diagonally in the middle of the room before, can be along the wall. The sideboard is waiting to be picked up tomorrow -- you can see how huge it is, at the right. And now all the furniture that was pretty much just thrown in there is an actual room. 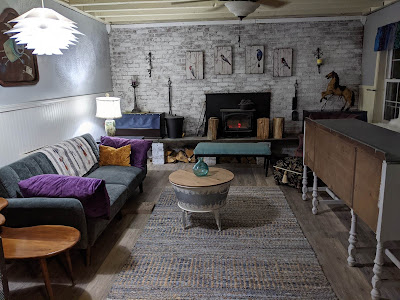 I've been getting some professional coaching, and I really haven't been able to explain to her how much all these undone projects have been preying on me. Every time I see something that I've started and just haven't finished, it ties up my brain so that I can't even think about the things I ought to -- and really want to -- do. Take photos of the cats, paint the art walls I have planned for the cat rooms, make videos to help with adoption processes...  So I've just decided these projects HAVE to get done so I can be mentally free to work with the cats.

The two biggest things remaining projects are the backsplash wall in the kitchen, and the last of the flooring.  Then I won't be tripping over the boxes of flooring that sit in the great room, or the box with the new kitchen light that's on the floor in the pantry. I'm already thrilled that the boxes of doorknobs are on the doors and not in a pile in the closet, and that the stair door is actually pretty instead of a wreck. And that I have a storm door again so cats are less likely to zip outside.