This summer was a waiting game. I won't go into all the roadblocks that life and work tossed up there--that's just the way things go. But now, with just a few weeks left to summer, and hopefully 2.5 months of above-freezing weather remaining, I'm finally tackling the house-and-cat things that absolutely must get done this year, or I'll spend the winter sunk in the doldrums...again.

New flooring for the downstairs, which is currently a mix of carpeted beat-up pine floor, vinyl in the kitchen, and hardwood in the woodstove room. I'm covering it all with "luxury" click together floating vinyl plank. I considered having it delivered and paying to have it installed, but at an additional $1.99 a square foot for installation, I decided I couldn't waste that much money, so it's DIY time. It was a nuisance to load it and unload it (36 boxes...) but here it is without a $60 delivery fee, and maybe I burned off a few calories. 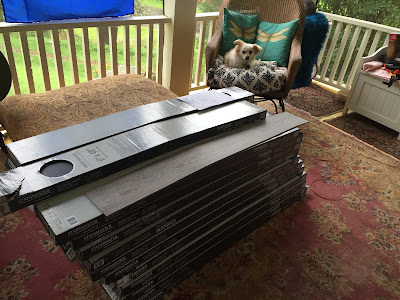 This flooring will leave the hardwood floor intact and unharmed if anyone wants to rip this up again in the future to redo the hardwood below. I however, need something impervious to water, due to cats, a dog, and my winter tromping from the front door to the woodstove with wood. Primarily the issue is cats. As we know, cats will pee on anything, if they are in the mood for it: 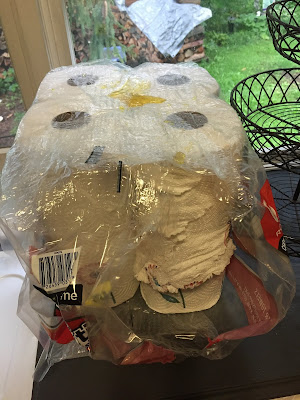 Last night it was the paper towels. I assume this was Puff Puff, since only a lightweight cat could perch on that bundle, and Coraline is pretty good about using the litter box. You'd think after all these years I would have learned never to leave plastic wrap out in any form whatsoever.

It's pouring outside (again) so staining the house or the raised beds--other chores on my list--will have to wait.

Here's the before shot of the black painted floors, covered with cheap erugs.com rugs that will get split up into different rooms once this project is complete. We'll see how this goes!

How many new beginnings do you get? 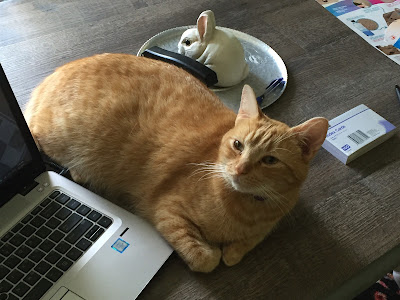 Cat guardians know cats will rotate their favorite sleeping spots now and again. Oliver will sleep on a particular chair for several weeks--I'll know to look for him there first. Then suddenly he has claimed the top spot on the cat tower and that becomes his home for the next few months.

Perhaps I model my behavior after cats, with them living all around me. As a remote worker, I can set up my "desk" anywhere I like. Sometimes it will be on the actual desk. Othertimes, I camp comfortably on the couch for a few weeks. Today, I moved back to the kitchen table, which I purchased and repainted specifically because it was large enough to accommodate at least two laptops and keep my coffee well away from either one of them.

The table was a $50-buck-side-of-the-road purchase off my neighbor. Unfortunately my paint job on the top was not impervious to the idle digs from claws of walking cats. I had some adhesive vinyl planks kicking around when I purchased them as a possible backsplash for my kitchen sink area (I decided they were too dark). Now they are the cat-proof surface of my table. Like most of my cheap fixes, I'm sure I'll regret it one day when they start to curl and I have to peel them off. But replacing them with new planks will be far easier than sanding and repainting a doomed table top.

All of this is my long-winded way of saying that once again I'm trying to blog. Despite the day-to-day activity in my life, and a large number of really great virtual friends, daily life has become rather mundane. I couldn't put my finger on why I was so uninspired, shadowed by a tinge of loneliness. It occurred to me that I used to have the same life, with a feeling of fulfillment, back when I blogged daily, and read the blogs of others. You'd think I'd have more time when I don't blog. Sadly---not. Because I blog in my head throughout the day, and then have a fog of guilt hanging over me that I haven't put it in writing. I'm guessing there are quite a few bloggers like myself that always expected they'd one day write a Great American Novel, so writing in their head is a fact of daily life--even though that Novel never came to be. Suspending the habit is simply not an option.

Cats and kittens are also a habit that, fortunately or unfortunately, a cat person cannot suspend. Unlike writing in your head, however, the cat habit has outside influences---people call and say "help!" I've exercised "keeping my head down" any number of times when I've had to accept that my resources were tapped, but when friends of neighbors call, saying "no" really isn't an option. Chances are good, those friends and neighbors have helped me in the past, and will again in the future. There are top-of-the-list folks in everyone's life.

Therefore, the Mountainview kittens came into the Owl House via a neighbor's son (also a neighbor) who had that worst of all scenarios, the death of a child, at the same time as a little spitfire of a stray calico bore kittens under his home. The kittens moved into my den. Taking in feral kittens during work-travel season is a recipe doomed to fail. Feral kittens need constant attention during their socialization period so they grow up friendly. These kittens must have really good "friendly genes" because they have been a delight--taming up sweetly despite my distraction. 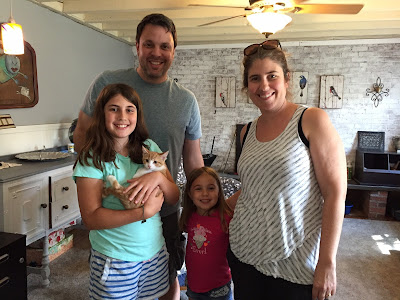 Two were adopted as soon as they were neutered, by the family of a man who was once a student worker (!!!!) in the Biology Department at Ithaca College where I once worked. We hadn't seen one another in about 18 years. We are Facebook friends. He saw the kittens, and they made the three-hour trip here...twice! Once to choose kittens, and once to pick them up after they were neutered.

These three are left: 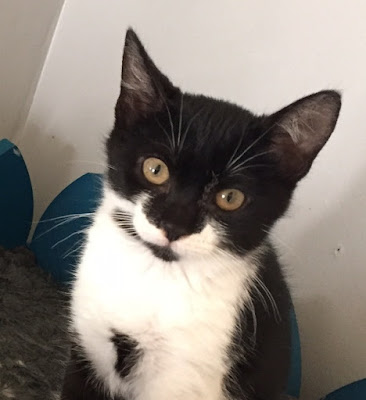 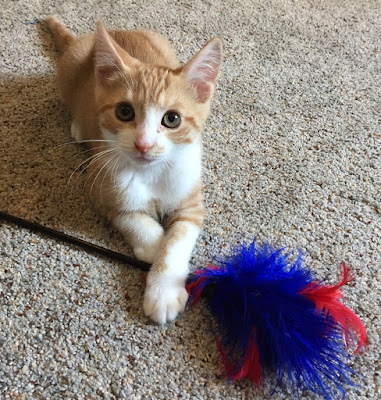 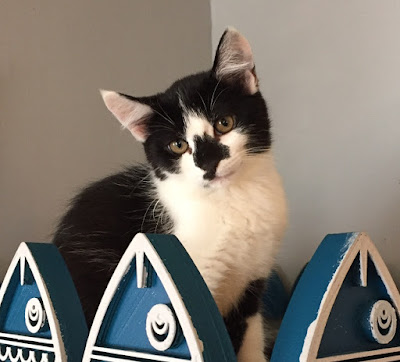 One black-and-white female has learned how to flummox the home-made coyote-roller at the top of the half-door, so my temporary fix is an aluminum foil door extension. I may need to purchase a real commercial roller in the future. I can't imagine the short piece I need would be that expensive (relatively).

Many time I wish I'd discovered rats are the amazing animals they are, before I started a cat rescue. A rat rescue would be much easier to manage, I think! 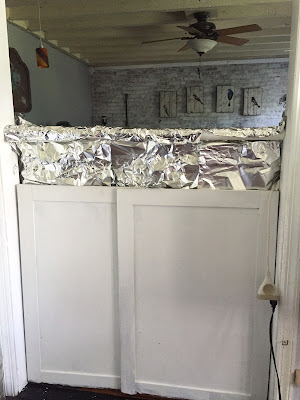