Lots of rescue...notsomuch blogging. Sorry for not holding up my end of the deal! Wow. What a year it's been, huh?
I've been a remote worker for 16 years now, so you'd think all this stay-at-home wouldn't get me down.  I was surprised to find myself staring into space with a big case of the lows, that I'm only just starting to shake off. No surprise...so is everyone else (feeling low, that is).
I've experienced some unexpected perks in higher adoption inquiries and now finally the spay/neuter clinics have opened. The first three colonies I've helped have come attached to freaking awesome people. Bam, bam, bam...all the cats fixed, kittens either here or sent off to their local shelter for socialization and adoption. And donations for the American Cat Project. 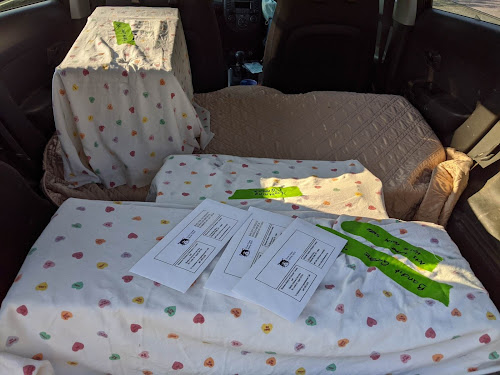 Finally getting out to deal with some cats perked me up a bit. I had been having the WORST problem with the sleepies. Not "OMG I'm so worn out" just "OMG why CAN'T I stay AWAKE!" I was beginning to wonder if it was due to one of the herbal teas I'd been drinking (I had to leave coffee behind...so sad...) but once I was up and about for something other than work--which I love, btw---the sleepies seem to have left me. It helps to have these little guys staring at me from the three-level cage in my great room. 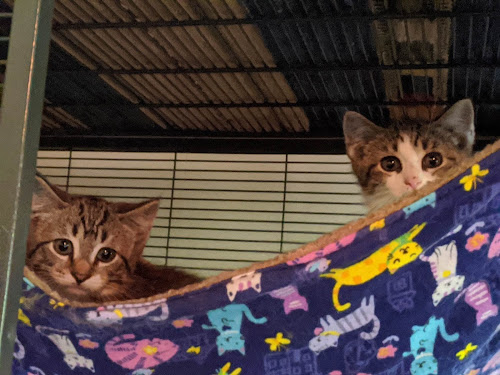 Before all this COVID stuff went down, I'd felt so great arranging to attend two conferences, HSUS EXPO and the Cat Writer's Conference, on my own dime (versus work). I'd signed up to volunteer for HSUS, which brought the conference cost down, and I found myself a cheapo flight and an even cheaper hotel. I'd really looked forward to seeing all those folks I miss since leaving Petfinder and being able to attend conferences without any corporate obligations (woot!).
Part of me wonders if I jinxed the whole world with COVID by actually arranging for a vacation for the first time in well over a decade! Luckily, all my costs were reimbursed by the conferences, hotels, and Delta Airlines (thank you, Delta!) because throwing all of that money out the window would have been painful.
It has been a bit of a culture shock, no longer traveling for work. I've discovered flowers that blossom along my road that I'd never noticed before. I have hanging flower baskets--because I'm home to water them. I'm slowly getting projects done than had been neglected for years. 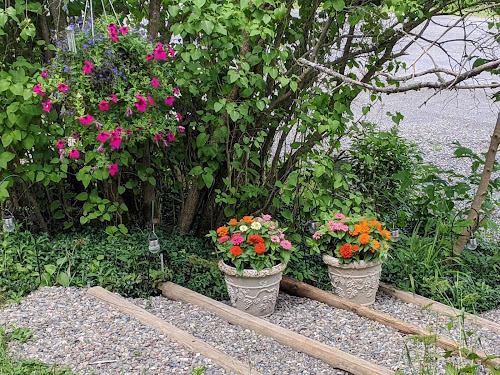 I have a garden! Raised beds! Yes, it took until just this week to get all four of them in, but I'll have some produce this year and hopefully lots next  year. Being able to eat Romaine lettuce again without worrying about a recall has been a small happiness.
And I have bears. Ummm...more to come on that. And if this photo seems like the bear was awfully close, it's because she WAS. And awfully relaxed. Apparently my side yard gives off safe bear vibes. 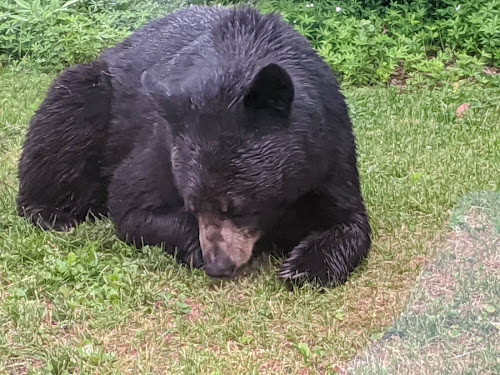 Since it's past solstice, it's now all a downhill slide of shorter days until winter---that's one reason why I'm back on the blog. It's going to be a semi-lonely year for all of us, so I figured it was time to get on here again. A lot of you have been very generous to me and in return I ought to be sharing what the hay is going on.
Kittens. Cats. Bears. Projects. Oh...and cooking! Is anyone else cooking?
2 comments: