While Amazon Wish Lists are wonderful, other friends have given in other ways. Here's a shout out to Nancy for kitten food from Ithaca Feed and Pet (almost gone already!) and Jan, who gave a generous donation via PayPal! I'm clearly going to be busy writing thankyou notes this weekend!

This is an example of the fuzzy photos my phone now takes after the water disaster, drat it all! I did store it in rice to dry it out, and the phone works OK. But not the camera. This is not going to help with taking photos of cats. 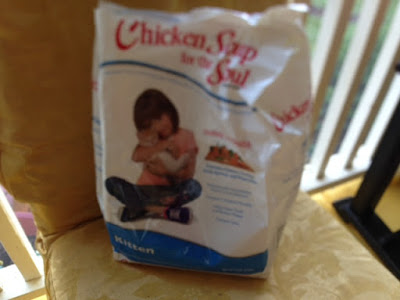 I can't thank people enough for all the canned food and other needed items that have arrived over this past month! Seriously, I was eating ramen and the cats and kittens were eating canned food...this is such a huge help! (On an unrelated note, how is it that Ramen is cheaper than it was when I was in college? How scary is that when you think of what it's made of, and who has to make it and how little they get paid to do so)?

From Sara. Sara also sent feather toys and more paper plates which arrived the next day, but my phone got wet and now the camera takes blurry photos :( 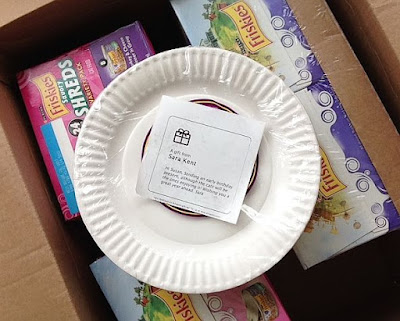 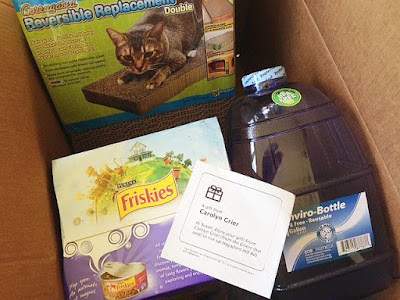 From Christy and Gordon: 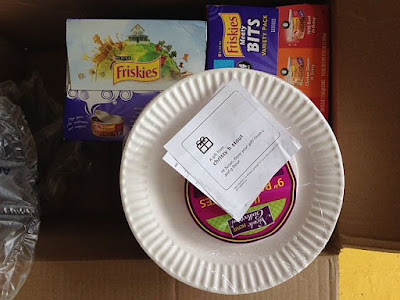 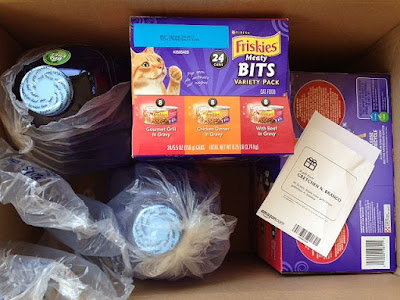 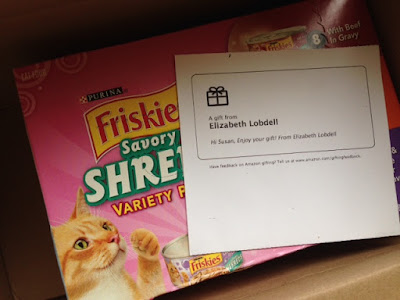 I also got a seventy five dollar Amazon card from work for the extra effort of our team, so that all went for canned food, too!

There is a link in the right column to our Amazon Wish List. You can also find it here. And remember, even if you are scraping by on ramen yourself, just reading this blog is a great help...a donation in itself. Every uptick in stats helps ward off compassion fatigue! Thanks, everyone!

Tiger Tom and Siggy check in

Snagged from Facebook...Tiger Tom and Ziggy (previously Siggy) of the three legs hang out on the high kitty shelves of their home. Clearly having only three legs doesn't slow Ziggy down from climbing! 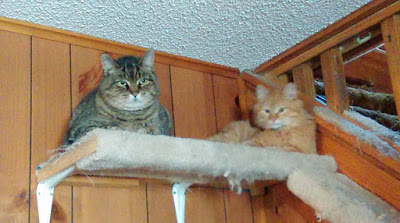 If there's one thing Craigslist has an abundance of, it's entertainment centers. You know, those huge overgrown bookshelves built to hold heavy electronics that are now obsolete in the new era of flatscreen TVs and MPG players. Early this spring I came across one in an interesting shape that was already taken apart, for twenty bucks, so I drove down past Owego to pick it up. It sat here leaning again a wall all summer until I finally decided I would hate myself if I tripped over it all winter. I got out the jigsaw to cut some holes, and put it together. I still had some new carpet tiles (also Craigslist from about a year ago) and found cat beds online for five bucks each. My hope is that with more places to sleep, the cats in the house will not all feel like they have to sleep with me this winter, or at least will have many sleeping options when I push them out of bed. 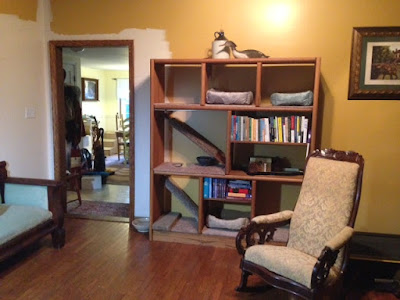 So far, other than the lower level, they are not particularly interested. I've started scattering treats around, and I'll make some other adjustments. So don't go out and buy one of your own! For all I know, this experiment will be a flop.

Then while driving into town to feed the Fast Food Ferals, I saw someone packing up a roadside sale with lots of old furniture. The last thing I really need is more furniture, but my car turned around on its own (I swear!). I saw an antique couch and asked how much, certain that it would be more than I would be willing to pay. But the guy said just 30 dollars, so we loaded it in my car and he even lent a bungie cord. A quick session with the Bissel Spot Bot and I had not only guest seating, but a place for cat beds when there are no guests here: 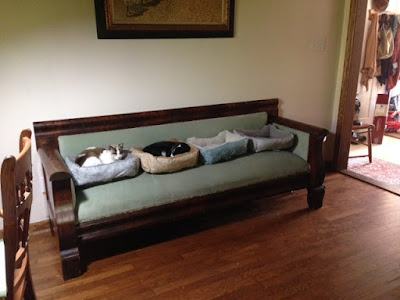 And the cats love it. So that was a success at least, and I won't feel so badly when I have to tip Fluffy or Pickles off the bed, since they insist on sleeping right by my head, which is no fun at all. 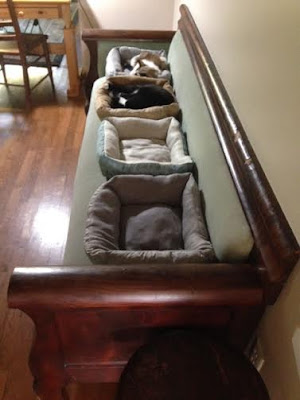 Spot and the ear mites!

Poor Spot was a tom cat who was hanging out near a house at the edge of Van Etten, with a big red wound behind his right ear from scratching desperately at ear mites, poor boy.

Luckily Karen, the landowner fed him and was worried about him. I finally managed to get over with a trap, and as we talked, he warily checked it out and finally went inside. Once here, I put some Revolution on him to start killing off those ear mites and set him up in a cage. Karen called the SPCA of Tompkins County and they were able to fit him in the next week. By today (the day of his appointment) he had stopped scratching and his ear had scabbed. The veterinarian's today cleaned out his ears, soaked off the scab, treated the ears with Ivermectin, and gave him a dose of Advantage II. That's quite a big dose of mite killer (since I had given him Revolution eight days earlier) but he seems to be OK. He got his rabies and FVRCP, and is sporting an eartip. I think someone ran a comb through him as well, because he is looking quite dapper! 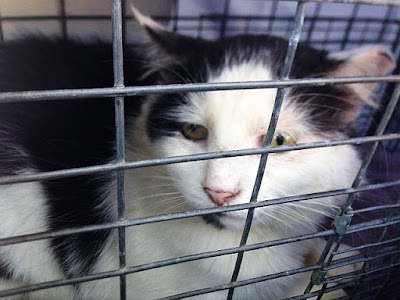 He likes to be petted and scritched under the chin, but he has swatted me once or twice. I'll take him back home with a cage so he can learn to let Karen pet him as well, and hopefully he can be an indoor/outdoor cat. If he refuses to stay inside, at least he'll have a shelter and there are lots of places to hide there.

The goal of trap/neuter/return is to "get to zero." Sadly, this means that the spay/neutered cats in the colony have to pass on to achieve that. Poor Beemer never really seemed suited to outdoor life. He clearly had been someone's pet at some point, but when pushed, he would lash out with claws blazing, so he wasn't suitable for adoption. He had a long coat, which meant he was more likely to mat up. And he was male, which also meant he was more likely to fight. Beemer lived on the colony up on hill, with friends and neighbors who have to deal regularly with drop-off cats. He was here last year to get mats combed out and his ears cleaned. Luckily he didn't mind going into traps to be captured for care when needed and he had caretakers who watched out for him when he needed some assistance. 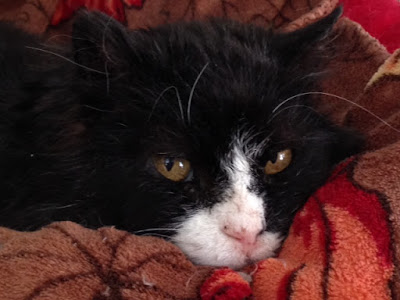 At the end of August, he was missing for a number of days, then showed up very, very thin. Was he ill? Had he been shut up in someone's garage for a week? His caretakers trapped him and brought him on down to me. I figured we'd see if he was eating, drinking, peeing and pooping, to rule out an obstruction or urinary blockage (since, being a free-roaming cat, there would be no previous history to provide the veterinarian), and then send him off to a vet. He enjoyed petting (to his usual point), was hydrated, was enthused by wet and dry food, and seemed to be doing OK. However on Saturday night he did not eat, and on Sunday he simply laid down quietly and began breathing from the gut. And then he was gone.

We have never tested any of the outdoor cats up on the hill for FeLV/FIV (except for those who were being brought in for adoption) so he easily could have been dealing with on of those diseases. At least he didn't hide and die off in the weeds and rain.

There is an earlier post about Beemer's colony here. He will be laid to rest in the Memory Garden here.

Now Grey Kitty is the last cat up on the hill.
5 comments: