Wings in his new home!

I take full responsibility for making him into a lard ball. Hopefully all the activity in Donna and Tim's house (three dogs! four dogs? I forget) will slim him down in short order!

Time for an updated banner

I don't know about you, but I was getting tired of looking at snow on my blog banner. However I don't have any good photos of cats outdoors. I decided to use Bear as a prop (although he is decidedly not feral). Bear is not a particularly genteel cat. Most of the photos I took ended up looking something like this: 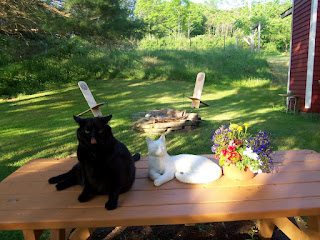 However, via the wonders of Irfanview and Picasa, I could crop one of the better ones.

Some very good news: Wings has been adopted! Donna and Tim of Totalily Water Gardens are going to try him out. They have some very big dogs so Wings is going on a trial to see how he does. They also adopted Espie from us, as well as Gunsmoke (who was a senior cat and has walked over the bridge). They have a room to start him in, with a screen door, so he has the very best chance of fitting in.

I'll take a good photo of him tomorrow. I was going to take him to his new home tonight, but the bear (the actual bear) showed up around 8:30 pm, and even though he ran off when I yelled, I called Donna to reschedule for tomorrow morning.
2 comments:

It's a beautiful day--a day to get things done. First things first--breakfast on the porch. Poor Molly lost her bed to Ivan. This is one of the drawbacks of allowing the cats on the porch. 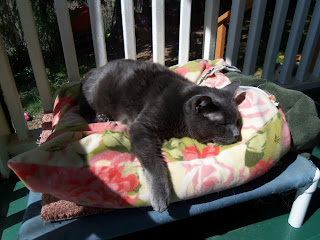 My friend Nancy is marrying soon, and the event is being held in a beautiful barn owned by a friend of hers. As we sat inside one rainy day, all talking up the upcoming day, I looked around and thought "I have a beautiful barn, too, and I've let it go to hell." That's not precisely true, as I have discarded a lot of junk that was down there. Now it's time to spiff it up so I can enjoy that beautiful space.

Here it is all junked up. Perhaps at the end of the day you'll see a nicer photo. 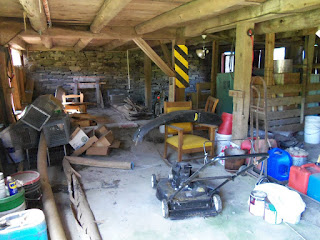 At this time of year, I'm sharing my barn with birds as well as the cats upstairs. I'm going to have to take breaks in my clean-up so the mother flycatcher, caretaker of this nest, can feed her babies. Unlike the starlings, she was too shy to approach while I was inside the barn breaking down cardboard boxes. 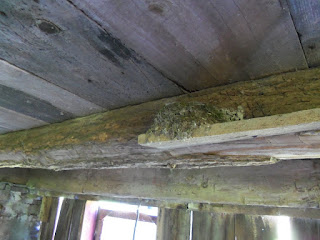 On an note unrelated to clean-up (but more pertinent to this blog),Coyote had a chance to get into the adoption program of another shelter back before kittens started pouring in everyone's doors, but when I checked her records, her rabies vaccination had expired. Of course, when I took her in to the vet for a exam, she had tooth issues. After the dental we learned her teeth were actually fine. Her gums were the issue. Coyote has stomatitis, which causes inflamed gums. The veterinarian cleaned her teeth and sent her home with antibiotics. Whomever adopts her will need to keep her teeth clean.

She was a good girl on her trip. Doesn't she have the most beautiful eyes? 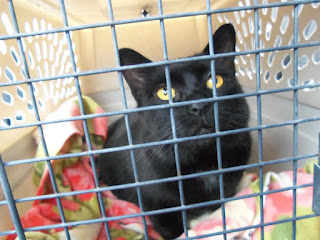 On a recent trip into Owego to meet friend and adopter Gretchen, I noted these flyers in a storefront from Owego's local cat rescuers. It would be nice to meet them. Perhaps if I get the barn cleaned up, I could have a picnic like we've had previous years, where cat folk can relax and not feel odd for discussing cats. 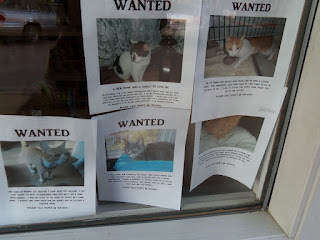 The owl and the pussycat

This is what we narrowly escaped in NYS...

Biscuit went out one day about two weeks ago, was trapped and taken to the Bowling Green/Warren County Humane Society, was scanned for a chip, then was immediately killed.

While the shelter has a 5 day hold policy for dogs, there is no such protection for cats. As people familiar with the behavior of cats know, many trapped cats will display the fear and apparent aggression that shelters associate with feral or anti-social behavior, which puts any unidentified cat at risk when shelters are crowded and do not have a hold policy. Emily feels that if the staff had bothered to remove him from the trap and see that he was neutered and well fed and groomed, they’d have known Biscuit was someone’s pet, and at that point sould not have been so quick to kill him.

Word spread locally about Biscuit’s killing and caused outraged animal lovers to turn their anger toward the shelter. While understandable, that anger, if unabated, will make it even harder for the humane society to raise money and do what they can to rehome animals and deal with their area’s pet overpopulation problem.

Whether or not Biscuit should or should not have been allowed to roam outdoors, the fact remains that he was a friendly pet cat, not a feral. Even indoor cats get lost---frequently. And in fact, what if he had been feral, but had been neutered, vaccinated, tested, and fed daily by someone who had invested personal time and dollars in stopping the reproduction of cats in their little corner of their neighborhood?

What other property can you lose and have authorities immediately destroy? Let's suppose your drop your wallet, and your local police immediately toss it in the shredder as soon as a good Samaritan turns it in. Leave a ring of sentimental value on a the edge of a mall sink, and security can take it to the mall jeweler and cash it in for a few bucks of scrap gold. Your old beater car dies at the side of the road, and instead of being towed and impounded for you to pick up for a fine, it is immediately shipped off to be crushed for metal scrap.

If your indoor or outdoor cats are not collared, they should be microchipped. Outdoor cats should be gently trained to wear a break-away collar. And local shelters should remain our haven for lost pets, with a holding period of at least 3-5 days, so people who care about their pets can retrieve them.

I have been to the shelter in Biscuit's story. It is a large, active shelter that saves many lives, with good people who are dedicated to the lives of animals. Yet it appears if a cat comes in in a trap, and there are no immediate tags of ownership, he or she can be killed immediately. It would be easy to demonize the shelter, but in fact the sheer number of cats coming into shelters can be overwhelming, and the facilities to house them humanely for possible redemption (which seldom comes) are limited. It's easy to feel that it's far more humane to put scared feral cats down immediately than box them up for 5 days waiting for an owner who doesn't exist.

Yet the Biscuits of their world, and their owners, deserve to not be caught up in this net of "mercy."

We have more to do.