The "Mountainview Kittens" as I call them, since they came from under the porch of a home high on a hill with a gorgeous view, are coming around nicely.

I was determined this morning to get up and get moving. The weather will be rainy all weekend and I have so many indoor things I could get done. First, breakfast for ALL the kitties, and a extra-special KMR-warm-water-and-pate-food slurry for the kittens, who are eating regular food but may as well have an extra dose of hydration and kitten-based nutrition, since I have it on hand. 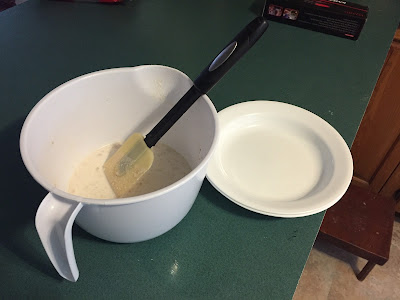 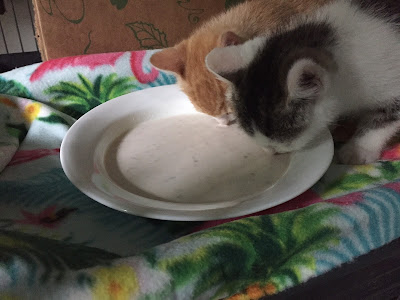 The tiger and white (male) is quite bold. One of the black-and-whites is next-friendly. Then the two yellows. The final black-and-white is the most shy, but even she purrs when I pick her up. They still will need understanding homes, since they were feral for quite a few weeks.

We have little spitters in the house

We have five new spring spitters in the Owl House. 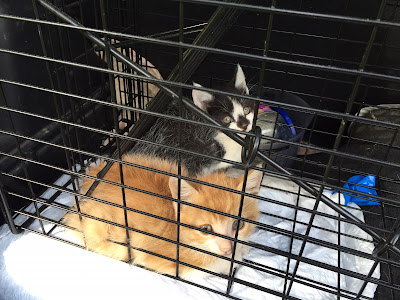 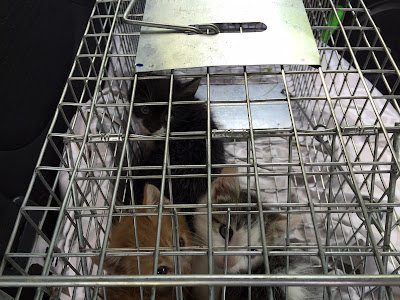 My nearest neighbor's son, who lives about two miles down the road from me, had a calico stray show up last fall. She presented him with kittens, at the same time he was dealing with a very serious health issue with his little girl. My neighbors, who had "adopted" one of my TNR'd feral barn cats, Bandit (by being nicer to him than I was so he preferred to live at their house), asked if I could help, since catching kittens was the last thing their son needed to deal with right now.

The calico is a wonderful mom--too wonderful in fact, because they inherited those wise calico genes and were quite wary. However because they also obeyed her perfectly when she called them to dinner, she called them right into the drop trap this morning. I had to fill her stomach with two cans of wet food and tuna so she would stay out of the trap herself, before baiting the drop trap, which I had put out a few days earlier for them all to get used to. I tried to catch them last night, but only two would come out, and only while mom was inconveniently halfway under the trap herself. This morning, two ran right out to eat after I hid on top of the deck with the trap below me, and I went ahead and sprang the trap to be sure to get at least two. I expected momcat to be peeved, but she was merely worried.

I reset the trap and retired to the porch with my travel mug of coffee for a good solid hour. Mom stayed silent and wouldn't call the remaining three kittens. It suddenly occurred to me that it was getting warmer and I had the first two kittens in the car with all the windows up, so I quietly went to my car to lower them all. When I returned, mom cat seemed to think it was a good time for the remaining kittens to come to breakfast. She went down to the trap and began to call. The final three ran right out and all of them went under the trap. I didn't really want to catch the momcat, because I didn't like the idea of an adult freaking out under the trap along with three tiny kittens, but I needn't have worried. When the trap came down, the kittens went ballistic, but mom just kept right on eating. I was able to fish the kittens out by unlatching the top, scruffing them when they came near my corner, and putting them into a standard trap I had waiting. The first two had been fairly docile, but these three more-shy ones were quite the spitters.

I picked up all the equipment I had brought with me, packed up the drop trap, put plenty of food out for the mom-cat, and left a note that I had caught all five, that I would make an appointment for mom-cat's spay, and to please keep her well-fed. I would have preferred to take her with me, but now that the barn facility is closed down and I still have one remaining upstairs house room to renovate, I didn't have room for two large cages.

I had further evidence of the great mom-skills of the calico when I first arrived at the house this morning. The owner was already off to work. I discovered that after he had left, mom-cat had caught a huge gray squirrel. It was laying on the door mat while she and one kitten began to make breakfast of it. It is because she is such a good hunter that the homeowner, who lives far up on a country hill, would like to keep her. I think her scrappy nature probably appeals to him as well. He has seen her chase foxes out of the yard, and of course he is now rodent-free. Happily it appears she targets mostly mammals rather than birds. And of course now instead of six outdoor cats, there will be only one. I'm just as glad not to have to find a home for her, since she does lash out with teeth and claws when she has a mind to do so. This habit might disappear once she is spayed, but one can't be sure. The homeowner, on the other hand, seems to appreciate her attitude. It seems she already has the perfect home, and I won't be surprised if she squirms her way inside the house the way she squirmed into his heart as well.

So we now have some little ferals to fuss over.
8 comments: