Normally there is a tug of war at the beginning of March between Winter and Spring. This year, Spring is notably absent from the fight, although I understand she plans to make an appearance this week. The many recalls on veggies this year, especially lettuce, have made me determined to get a garden going. I have the raised beds provided to me by the closing of Totalily Water Gardens (their water lily tanks), and many walking neighbors who probably would appreciate some free veggies. Because I never buy seeds from the many seed catalogs that arrive here via postal mail and I purchase my starts from Mountaintop Greenhouses right down the road, I had to find a way to funnel my spring energy. I purchased a potting bench to serve as a rolling roadside vegetable giveaway cart. 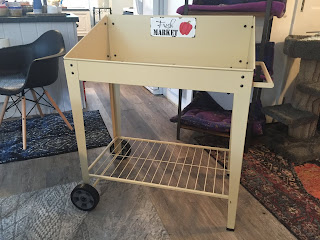 I used to have a beautiful tile-topped stand alongside the road for veggies and other free stuff I regularly give away, until the day someone took the word "free" over-literally and took the entire farm stand. I'll lock the cart to the fence when it's out, and I'll bring it in at night, since that appears to be necessary.

I do need to sit down and put pencil to paper to plan the raised beds. Normally I plant haphazardly, and I always regret it. I'll need to order a truckload or two of topsoil to fill the beds. I should have done that, and mixed in some local manure compost, last fall. Last fall, however, our entire region was worrying more about flooding than planning gardens a half-year in the future.

When I have a garden I have a lot more contact with my neighbors. There is always more than I can eat, or weeks when I'm traveling when I need others to harvest, or food rots on the vine. When I'm out weeding, I'm actually outside when neighbors go for walks along our country road. I've been a virtual hermit other than work for the past year, and that needs to change.

Any suggestions on what to plant? I tend to stay away from things that are really cheap to buy (carrots for example). And not only do I dislike eggplant, it attracts flea beetles. I plant cherry tomatoes instead of full-sized ones because they tolerate my periodic absences. My house sitters don't seem to understand that when I leave full buckets of water near a container, that means to empty the ENTIRE bucket on the plants, not just part of it, so everything I plant needs to be able to deal with a few days without full watering. I think they worry about drowning the plants, not realizing that the containers drain so easily.

Kale grows long into the winter, and I prefer swiss chard to spinach when it comes to sauteed greens.

And of course: Flowers.

Yes, there will be cats posts soon. I took two wandering tom cats to the veterinarian today to be neutered. Of course, I forgot to get photos.

That Question: What do I want to look back on when I die?

It's a funny question, isn't it? It has entirely different impact, depending on how old you are, and how healthy you perceive yourself to me.

Now don't freak out, family and friends. I'm not poised to reveal some illness. This is just the "Question" OK? Thank you muchly; you can pour yourself coffee instead of alcohol now, 'k? No big announcements, here!

Nonetheless, contrary to popular opinion, there are far more life-reviewing milestones when you are older than when you were younger. A lot is made of turning 16, 18, 21, and 30 amid the younger years of your life. But nothing compares with things like job changes at mid-life, your first colonoscopy, the first loss of a too-young friend to an illness, caring for a family member during end-of-life, or just a sudden realization that if you learned you were going to die within six months, you wouldn't just be scared, you would be discontent with how you'd spent a big chunk of your life.

I was "lucky"--along with many thousands of others--to be involved in the huge animal rescue changes that took place during and after Hurricanes Katrina, Rita, and Wilma in 2005.


That I was privileged enough to be working for Petfinder, and the networking that took place after launch of the Animal Emergency Response Network (AERN) where lost and found Hurricane Pets were posted, is a milestone in my life I will always count in gold. Mostly I was simply riding a tidal wave created by others, but to look back and see all that has changed since that one year is overwhelmingly wonderful. Previous to 2005, national groups worked mostly solo, promoting their own work. After Katrina, national organizations, shelters, rescues, and even web resources, discovered that trying to go solo meant repetition and failure. A large number of partnerships--even the mere possibility of partnership--that exist now and save thousands of shelter and street animal lives each year--were born from the mud of those hurricanes, the sudden awareness of owners who risked their lives because they refused to leave their pets, the organizations who responded to help those animals requiring rescue, and organizations and volunteers who dedicated months and often years working to reunite left-behind animals with their displaced owners, or find those animals new homes. 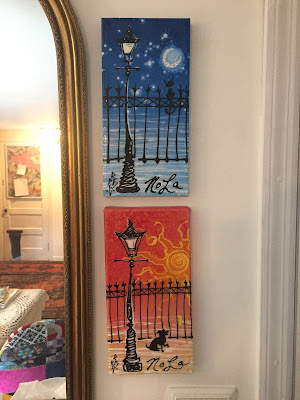 I'm 56. It occurs to me I only have probably only a decade when I can count on being able to scramble around under bushes, and up to two decades if I actually manage to take better care of myself than I am now (I spend the majority of my time on my butt behind a computer). For those of you in your 80s still hauling cat traps, all the more power to you---unless I make some life changes now, I won't be able to match your example.

Once upon a time, I went to conferences on my own, to learn. I looked carefully for a conference near me (there weren't a lot of them back in the 90s), and I spent my vacation and few available dollars to attend. I went to ever session I could fit in. Then I was lucky enough to get a job where I was sent to conferences to speak or exhibit, and I no longer had to sleep in my car or camp in a tent. However I had other networking responsibilities that meant I wasn't there just for my own edification.

Looking around now 15 years later, I see there are some funky, cool, and cutting edge conferences I'm missing out on, that I really need to attend if I want to stay on top of things. The Online Cat Conference was a real eye-opener. There are amazing people out there---some long-timers who have moved onto incredible new ventures, and a lot of brilliant newcomers.

So I'm off to The Acatemy Spring Symposium next weekend, flying solo, looking forward to wearing probably-non-work-appropriate cat lady clothes and keeping my ears pointed toward new ideas and the inspiration of other women and men working exclusively with cats.

If any readers are going, let me know! It's time to shake the dust out of the crannies of my brain. I want to start counting UP the years of my life by what I contribute, rather than counting down toward a rocking chair!

If you are feeling dusty like I am, here are some upcoming options

And if you are a writer, even if you aren't a CWA member, there's nothing more inspiring than the Cat Writers Association conference to open your mind to issues across all topics that relate to cats, including those beyond rescue.

Are there any I've missed? There were quite a few cat gatherings chatted up during the Online Cat Conference and I didn't get them all written down.