The mystery of the Possum kittens

Our unthrifty kittens are still unthrifty. An adopter, whose aunt is a veterinarian, sent some ideas, and we will be checking them out with our veterinarian. I have a family member who also needs support, so I won't be able to get them in right away. 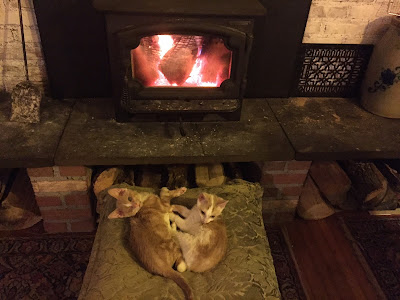 Here is Tank with one of the kittens that came in after he was admitted. The black kitten is 4.5 months old. Tank is six months old. 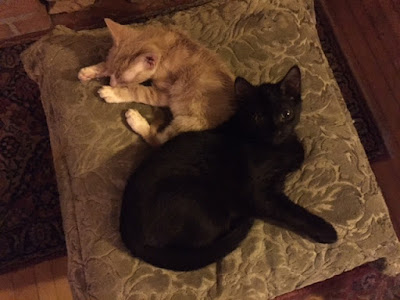 In addition to having scruffy fur, drinking tons of water, variable stool consistancy, periodically gagging (not throwing up), and failure to grow, they seem to have a lousy immune system, which isn't surprising. They catch EVERYTHING but luckily got their entire vaccination series and seem to slowly get over the URI's they have come down with. Currently Tank is walking around with a winky eye.

They are active little monsters. While they don't play as much as the black ferals, Nod and Blyken, they still motor around pretty rapidly. Tink, the smallest one, follows me everywhere. Tank, the larger kitten, got his paw stepped on accidentally by hanging too closely to my feet, so he has learned to keep his distance. Luckly, even though they are skinny, they are solid muscle. It's like having two animinated poorly taxidermied kittens running around.


Here they were as normal little babes. The other three kittens in the litter did just fine, but at about 8 weeks, Tink and Tank just stopped growing.

Luckily, they seem to fall into the "so homely they are cute" category. Two visitors have expressed interest in adopting them, but I do want to try to find out what is wrong with them first, if at all possible. Something like a liver shunt might be fixed (although it probably would drive me into the poor house). No worries at this point, however. My vet is curious about these guys as well, and she really has been helping out with donated services and tests.

Hang in there little Possums!

They do need better names than Tink and Tank, however.
3 comments:

Goji came to us from Waverly. Because he was neutered when he was found, we asked Stray Haven to keep him a short time and post him as "found" on their Facebook page to see if an owner might be missing him. Goji is a couple of years old. While he tolerates the cats here, he does sometimes give them a smack--he probably would be happiest as your one-and-only. 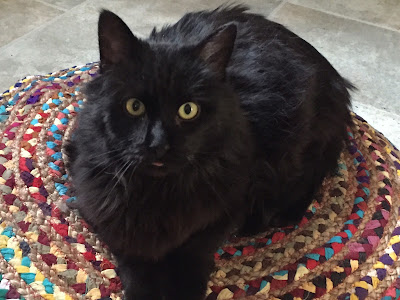 Note on below: Fleurie is adopted!!

In order to get swift Fleurie to sit still long enough for me to get a photo of her pretty self, I had to bribe her with some catnip. She proceeded to bath in it as well as load herself up with static electricity, which appear to have also reached her sparkling eyes! Fleurie is about 8 months old, spayed, and FeLV/FIV negative. She's a sweet, very friendly girl who is ready to go to a new home. 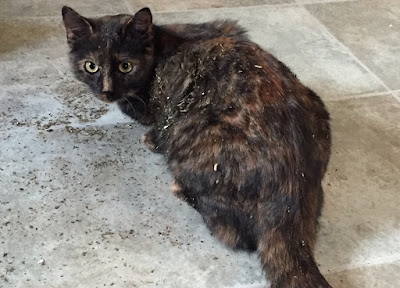 Byron below was adopted with Fleurie!

Sweet Byron II seems to be keeping his cute kitten face as he grows up, which I love, because it's irresistable along with his sad sweet meow and compels you to do whatever he asks. He would be a great companion for another cat, or to be adopted with Bryce, his larger, more outgoing, brother. 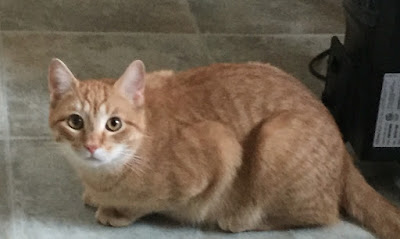 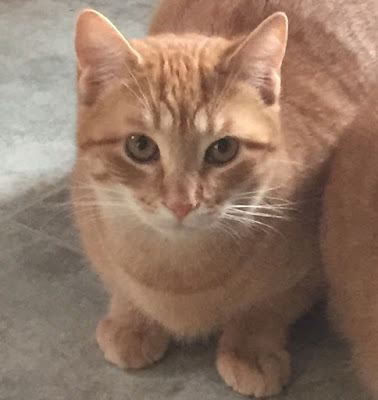