How much work goes into a rescue

This video is about two rescued dogs, not cats, but it shows how much time and patience has to go into rescuing friendly, but scared, animals. It's a great, heartwarming video--perfect for a Sunday morning.
1 comment: 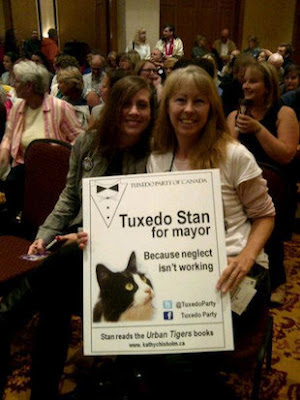 Here's 15 minutes of fame that I hope spay/neuter advocates take advantage of. Tuxedo Stan is running for mayor of Halifax Canada on the slogan "Because neglect isn't working."

So go...If you are on Facebook say thanks on their FB page. Share a successful TNR story. Share a link to a resource. Forward the story onto your local online paper. 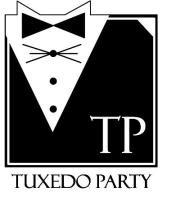 What happens when people shoot at feral cats?

So far, three very bad things. They shoot their grandchildren instead.

They shoot their neighbor instead.

They shoot a pet cat instead (and this cat was confined to a trap!)

This is why "just shoot them" can't be recommended as a public policy.

So let's just file that "shoot 'em up" advice away for good, as dangerous and irresponsible, along with cruel and illegal.

Adopt-A-Less-Adoptable-Pet Week is coming up

Here you go! Docupub.com I'm creating .pdfs of my cat posters that I can email to friends to post on their driver's side back seat window to help get my long-termers out of here. All I had to do was upload my .jpg of the poster and then save the .pdf it returned to me in my browser. They also have an email version. I have not tried that.
No comments:

Are you giving money to PeTA? When Shelby County announced they were overfull and might have to kill shelter pets, PeTA sent them a GIFT BASKET thanking them for making "the right decision" -- and it would appear they didn't mean "good for you for reaching out to the community to prevent having to kill the pets." PeTA meant "good for you for killing pets." This is the video Shelby County advocates created in response, comparing the Shelby County shelter's intake and adoption success to PeTA's (PeTA killed all but 6% of the pets in their shelter in 2011). There's a photo of PeTA's lethal thank you gift, as well. You might want to "pause" to read the stats they post, because the video moves on a little too quickly to read it all.

Shelby County No Kill Mission vs. PETA from No Kill Advocacy Center on Vimeo. 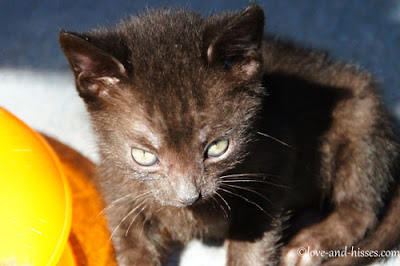 You haven't been seeing many kittens here, but you can see a bunch here at Love and Hisses.
No comments:

I always feel more relaxed after disconnecting my brain from work (and life in general) by reading a book. I've done less and less reading over the years, simply due to a perceived lack of time.

When Friday ebbed away, launching a three-day weekend, I resolved to head out to the local diner for a cheap dinner with a book on my Kindle. I posted on Facebook for suggestions (thanks everyone!). I now have a list of books to read in the future. When I logged into Amazon.com, there was this auto-generated suggestion for me, based on things I'd looked at in the past, online: 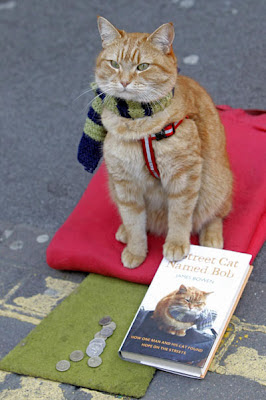 Photo from the online ChinaDaily

A Street Cat Named Bob was a great little book (and in large type via Kindle!). For anyone who has read Jackson Galaxy's bio, "Cat Daddy," the story will sound similar. However, in "A Street Cat Named Bob" the tale has been boiled down to simpler elements. The first thing I did upon finishing the book was to jump online and go look for the YouTube videos it mentioned.

Here is a UK media article about James and Bob. And here are a couple YouTube videos of the pair. A post-book video

And a pre-book video

While James did know that travelers had taken photos and videos of the two of them on the street, he only learned Bob was a bit of an internet sensation until passersby mentioned that they had learned of him via YouTube.

When you see the difference between James' hungry and drug-ravaged face in his pre-book video, and his relaxed and filled-out body at the book signing, it's clear how having Bob, a few dollars in his pocket, a little food, and the taming of two huge devils in his life (separation from his family, and drug recovery), have improved his health. Let's hope he continues to "keep it simple" and doesn't let the larger media monsters (the suggested movie) destroy his life, and his story.

Kudos and blessings to the literary agent and publisher of the British version of "Marley and Me," who stopped and talked to him, and helped to continue to change his life, by encouraging him to write his small book. Certainly The Big Issue, which gave him an legit street job deserves a shout out.

I think the word "inspiring" is overused, sadly. Let me just say that I felt, in all the online hype about cats, both bashing by the negative/cat haters, and the gushing by the promoters of the "overcute" online kitty videos and photos, it was heart-mending to read a story that so clearly illustrated what probably many hundreds of thousands of people have experienced but can't articulate: that indescribable contentment we experience when a cat shows, by the little things he does, that he loves us back. 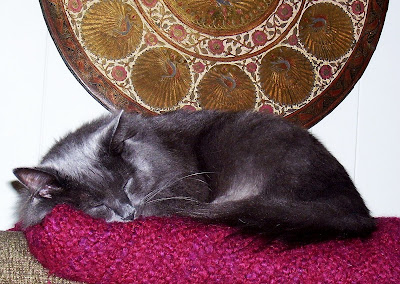 Judy, who adopted Finn (formerly Thai) came by with her granddaughter Kate a few weeks ago. It looks like they may be regular visitors, which will make the facility cats very happy! Judy sent us a photo of Finn, and you can tell he's very happy.

Shout out to Christy---here's your boy! 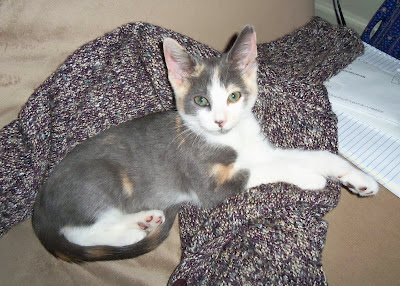 Because I have so many senior cats who need homes, I've been keeping my head low on the kitten front. There is, however, nothing you can do about the abandoned ones. A few weeks ago, one of my neighbors knocked on the door (or rather, Molly sounded the alarm when she walked up the path), because the French exchange students she was hosting had gone for a walk, and a kitten had attached herself to them, in the area of my farm.

The neighbor is allergic, so the kitten was not brought into her house, although they were feeding her. I stopped by later that day, and the sweet little thing was hiding under a car.

No problem finding this cutie a home, right?

Gracie has diarrhea. I figured "no big deal" but a standard worming did not clear it up. While I was traveling, she stayed with Ellen, a vet tech, who ran a fecal on her (negative), put her on a bland diet (no change), tried the kitty Pepto route (no change) and sent me home with FortiFlora. I have her on a chicken and rice diet with FortiFlora, and while there is some small improvement, it's still not a good stool. So if I don't get her straightened out soon, I won't have a kitten for adoption. I'll have a teenager.

She is a cutie, though, and Ellen fostered her twice to keep her own shy foster kitten company and help him come out of his shell. It's nice when I can shove animals off on other people, and it's actually not a burden, but a help.

I think I'll have her stool checked for giardia. I'm not sure that was done.