One day this summer, Christy sent me a photo of a cat who showed up in her garden. The cat looked like Jewel, who had spent two months here raising her kittens, and graces the banner of my previous blog. We compared markings and were fairly certain it was her. However Jewel disappeared, even though Christy left food out for her. Jewel was about a mile from the barn where she had originally been returned after being spayed.

Friday, the phone rang. It was Christy, and Jewel had made another appearance. I called Jewel's owners and, sure enough, they said they had not seen her in months. This time Christy scooped her up and put her in the workroom, and I drove over.

I'd felt badly about putting Jewel back out in the barn to begin with. She was far too friendly to be a barn cat, but I'd had no room at the time. Since Jewel hadn't "stuck" and was apparently going from house to house out there in the Styx, and since her owners said they would take her back but would like to see her find a home, Jewel came to stay with me again.

But first Christy offered tea, and I accepted. If I'm going to get stuck with another cat, I'm going to take all the human contact I can get. I told Christy I had to take a photo as evidence so my family knows I actually do periodically commune with humans. 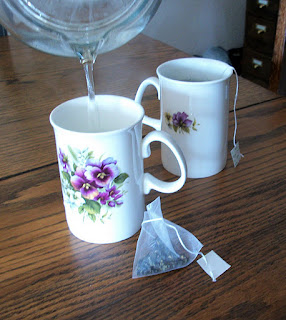 Jewel was as good as gold in the crate in the car.

She has settled in quite easily here. I'll get her to the vet this week for a combo test and rabies booster. 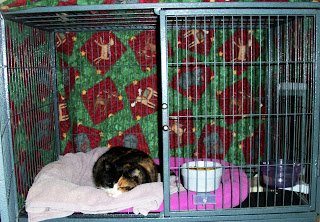 Here's the link to Jewel with her kittens last summer.

And here she is today in the downstairs of the cat facility: 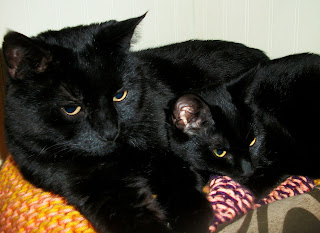 Bear is not a cuddler, but Tortellini has decided he should be. Bear is twenty pounds. Leenie is 5.5, and she's six months old, so she's no wee kitten. She's going to be a little girl like her mom, and like most little girls, she believes the world can't possibly resist her charm. She sleeps on my wrists when I work on my laptop. It's a good thing she is tiny, with a habit like that!
3 comments: 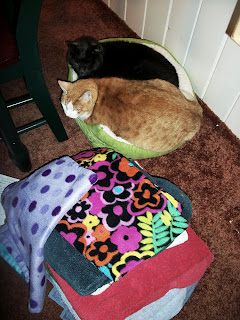 Four days coming up, plus vacation days tucked in periodically until the end of the year. My poor rescue and my poor cats have been sadly neglected. So have I. The first thing I did when I got off at 2pm was take a 20 minute shower. Now I'm heading into town to check on the Fast Food Ferals and pick up wine for dinner. Then it's back here to take photos of the cats for Black Friday.

With five black cats looking for homes, it seemed like a good marketing crossover.

Laundry is already underway. Ivan and Nell have already hijacked that task, knocking over the pile ready to go to the cat facility and pre-warming one of the beds.

I have also decided I don't like the current blog layout. The banner is too large and the colors are too garish. So you'll be seeing some changes there.

I hope you all are gearing up for a few days of relaxation if you can.
4 comments:

at Texas Oasis.
No comments:

When fixing feral cats doesn't keep new cats away, this is cited by anti-TNR folk as proof that TNR does not work, and that cat advocates don't know what they are talking about. "See, look, new cats!"

Cats do in fact have territories, and in many cases they do protect them. However, unlike wild populations, cats do not necessarily move from Point A to Point B by themselves.

Most commonly, they are abandoned.

If you take a tame pregnant cats, or a batch of kittens, and dump them at a city park where there are altered ferals, those cats aren't going to move very far. They have been transported violently from the territory they knew to a territory they don't. They will latch onto the nearest source of food and shelter they can find, which is the food and shelter put out for them by caretakers. If kittens or a tame cat are dumped at a house or barn, they aren't going to set off across the fields looking for some mystical "better" place just because the resident cats beat up on them. They are going to try to stay out of the way, snatch some food when they can, suffer from wounds, catch illnesses, and become a problem.

Animal control professionals and cat rescuers are often called out for kittens dumped in some remote location. Those kittens will often sit just off the side of the road for days. Their little brains don't process that "wow, we are in trouble, we need to go look for help." Instead their genes are telling them "Sit here and wait for mom. Maybe yell really loud." Unless someone hears those yells, they die. They don't know there is a farmhouse a quarter mile down the road where someone might help them. They sit where they are put.

Male cats have it built in their behavior to move when things get overcrowded. But even friendly male cats are more likely to stay where there is a big house ("I know what a house is!") and humans coming and going, and food on a back porch.

Some cats will in fact keep other cats away. But what does that mean? Now there is a unaltered cats running around outside the colony, perhaps destined to start a new colony.

I strongly believe we need to promote the Caretaker as the reason TNR will work. When cats are fed daily, and traps are set to give cats rabies boosters, or catch injured cats, new cats will also be captured. Friendly cats and kittens can be removed, maintaining the status quo. New ferals can be altered before they spike numbers by adding new kittens to the mix.

Where there is no caretaker watching for new cats, any form of cat control will fail. Lack of a caretaker is why removal so often fails. No one wants to be the local cat killer who notes the arrival of two orange kittens under the cars in the state park parking lot, spends three hard days catching them, and then hauls them off to the local overcrowded shelter where they are killed. Average people might grit their teeth and do it the first time or two, but after awhile they get tired of putting out so much work (and paying a surrender fee), only to be known as that heartless person who kills all the cats everyone else cares about. The "cat killer" may in fact be the only one putting any effort at all into the cats...and yet they are being demonized.

This is why there are so few dedicated private "cat killers" in the world, and removal projects fail. A landlord gets tired of cats at his apartment complex, sets traps for a week or so, hauls them off to the shelter, but doesn't bother to enforce an "indoor altered cats only" requirement or monitor for new cats. So he waits until there are another 30 cats running around before trapping again. Sooner or later, the shelter says "Sorry, we are going no-kill" and he as no place to take those cats legally. So he either ignores them, employs "shoot, shovel, and shut up" (which is illegal and therefore can't be promoted as a public policy) or turns to TNR.

So let's move "territoriality" back to the minor role it deserves. I believe we set ourselves up for failure when we pull that out as a major benefit of TNR. It is a benefit only when you have territorial cats, in an area that experiences little or no abandonment. If you have that lucky mix, you are fortunate indeed.
5 comments: