On Saturday, I drove to Norwich to meet family for a visit to my mom's grave and a lunch together in remembrance. We all brought flowers to brighten the winter, and one of the little cats that my friend Donna gave me (she gifted us her entire inventory of these kitties when she and her husband Tim closed their shop) has been guarding the spot for a year now. He looks just like Oliver, one of my mom's last cats. 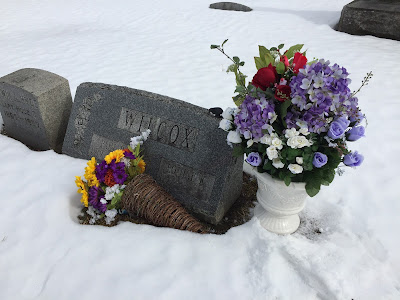 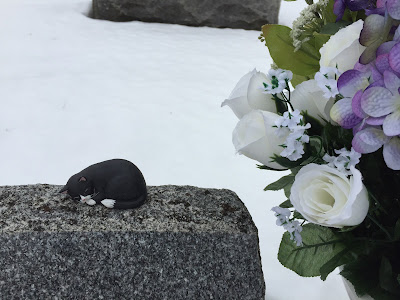 On the way home, I stopped at mom's favorite pet shop, where she used to browse for gifts for her cats, and also for her aquarium hobby. Creature Comforts is a wonderful spot for cat scratchers. They have the best prices that I'm aware of, and have lots to choose from. 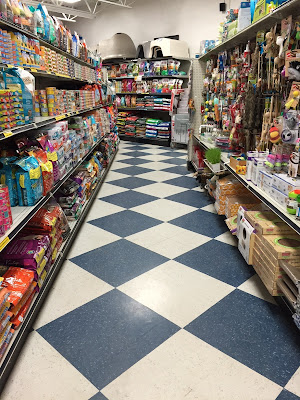 Nothing but scratchers! The large ones are two for ten bucks. 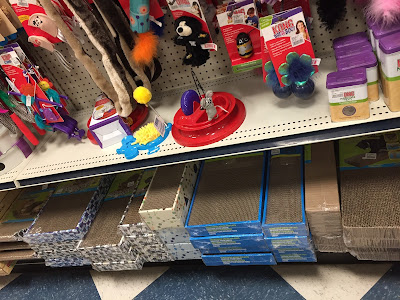 They are great in the cat rooms, because they have two sides, so can be flipped over when one side gets ratty, and are disposable. I use the beat-up ones to help start my wood stove fires. They can be a bit messy with the little bits flying around, but since the rooms are swept twice a day, I find this really only is an issue in fancy living rooms rather than cat adoption areas. 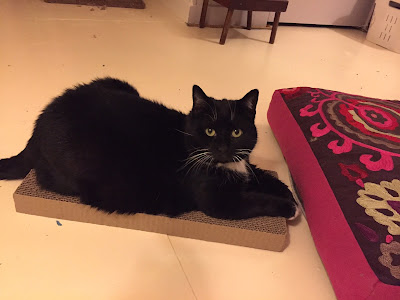 I have a GoFundMe campaign going, to help with the non-renovation costs of the new cat rooms, since I can't bring over things like carpeted cat furniture, beds, etc. that are in the old facility. There's no sense in taking the risk of moving any viruses, spores, etc that might be hitching a ride. Obviously the same things could have come along in the fur of the cats, but it doesn't make sense to overload the new rooms with those potential nasties. The cat facility is 15 years old and it has wood walls and lots of crevices, not to mention dust flying around.

I already posted one of the cat trees I purchased at Home Goods --- a surprisingly affordable place for large cat trees...about $40 cheaper than big box pet stores. I also picked up a second one so each room has one. Pepper and Timea are somewhat offended that they didn't get to keep one after trying it out, but then, they get all the "human" furniture in their room. 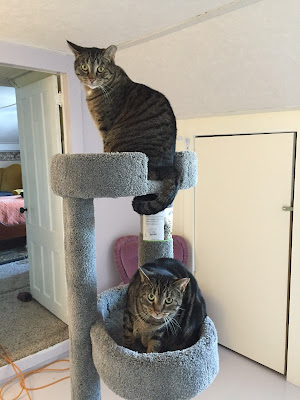 Normally I don't like to buy used things online for the cats, but I'm always on the lookout for affordable "bright" things that make a room look homey, that can ultimately be re-covered or thrown out if needed, without breaking the bank. I couldn't resist these two cushions, and the seller arrived at the hand-off spot with her dog as back-seat driver, and turned out to be a total animal lover. 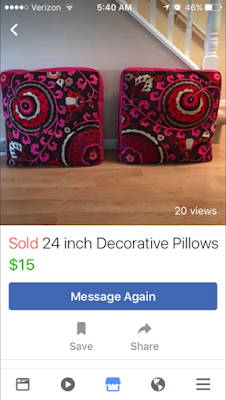 I also bought two very large, heavy-duty and scratch resistant totes as room litter boxes. The standard Rubbermaid type I normally get end up with deep claw-grooves in the edges in just a month or so, and those scratches hold nasty things like worm eggs, etc. These seem to be working quite well---we'll see how they hold up! In addition, I picked up four extra-large standard cat boxes for use in the two cages that are now upstairs---one cage in each room. 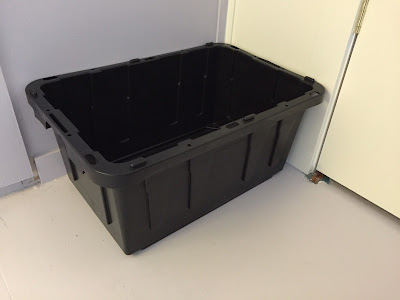 I also ordered very cheap non-slip socks for visitors, since shoes can't be worn upstairs until the vinyl floor is down...the painted floors won't hold up to a lot of boot traffic. I've discovered the calming pheromone collars seem to work on my fractious pet cat Oliver, so I purchased more for the three "attitudinal" cats. Timmick is now sporting one. I'm not sure if he's being low-key because the collar is working or because he's not sure what to make of wearing a collar. I also ordered ComfortZone pheromone refills and a few more plug-in dispensers to help with the initial stress of the move.

I discovered the shy cats preferred to be hiding low rather than sitting in the cat tree, so I purchased two felt cubbies (the blue items in the photo). I also hoped to have a speaker for music upstairs, but despite being advertised for 100', the speaker I purchased did not reach into the cat rooms--probably due to the thick wall (for only $25 I should have known) so I'll be taking that off the cat account. Perhaps once I get some sort of additional bluetooth transmitter it will reach, but I'm not going to invest in something like that without some research. Unfortunately, there aren't enough electrical outlets in the rooms to support plug-in radios, so I'll need to come up with something to deal with the total quiet upstairs. 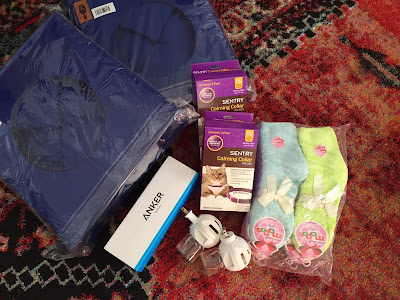 Hard floors without carpets echo and are frightening to shy cats. Since these are smallish rooms, I figured just small 4' round rugs would do the trick. They can be cleaned easily, being small, or replaced affordably if they are totally ruined or if some illness gets in the place. I ordered the rugs from Overstock, and also picked up new cats beds from TJ Maxx, another place you wouldn't expect to buy affordable pet beds. Once the cats have stopped moving everything around, I'll be adding some of the wonderful handmade round blankets Handmade House in NJ sent us earlier and I'll be sure to post a photo of those. 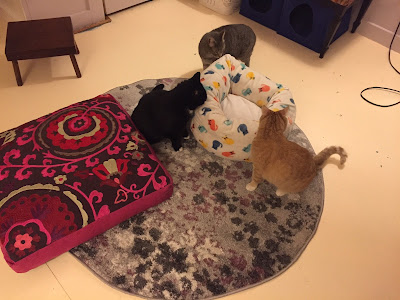 I'm really enjoying have rooms that are bright enough to take photos! What a change from the roomy but dark barn. It may have had tons of windows, but the dark walls inside always sucked up the light. Video is even better. When I switch from photo mode to video mode on my iPhone, the screen grows even darker. Now, video is quite bright! If you follow us on Facebook you will have already seen this video of Eve, Heidi, and Pitter, checking out the new rug and bed in their room.

I still have more things to include, but this is enough for one post. I also have some before (scared!) and after (OK, this place isn't so bad I guess) photos of the cats to add. I can't thank people enough for their donations and online "shares" of the fundraiser!

The cats are in the house! I'll be adding more stories and photos of them. But this weekend's project, including hilarity, was wallpapering the ceiling in the far back room. Gretchen had helped me paper the first room a few years ago, aided by wine and lots of laughter. Nancy volunteered to help with the second room (wine and nearly incoherent laughter was also included this time). The ceilings are quite low, and are easy to reach with just a footstool, but sticking up those long sections of gluey paper is a challenge, and it's even harder when two women are frantically trying to keep one section up while pasting up the rest.

The rooms have those small insulating tiles that no paint can improve, therefore I chose paper to hide them until the day when the entire room is gutted and re-done. You can see the obnoxious unattractive tiles peeking between two papered sections here: 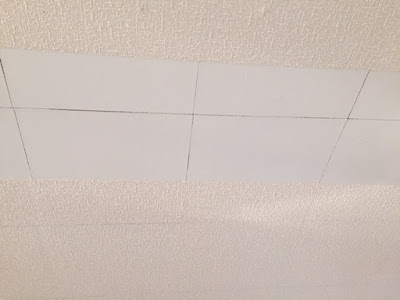 Once the ceiling paper has completely dried for a few days, I'll paint them the same white as the two white walls (the purple walls are featured in the photo). Even unpainted it is a huge improvement. 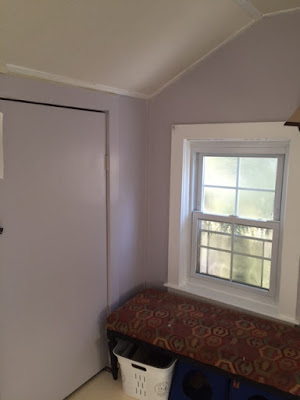 The wallpaper is pre-pasted, so it just needs a soak in the tub to activate the glue. You wouldn't think just some wet paper would add much humidity to the room, but indeed it does! 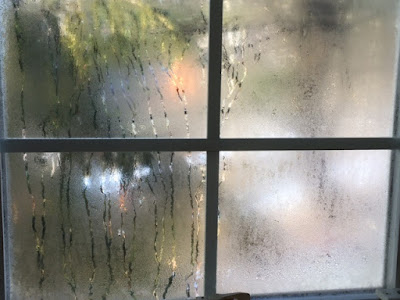 I purchased two small circular rugs to "warm up" each room, with money raised from the GoFundMe campaign (more reports on those funds coming up). 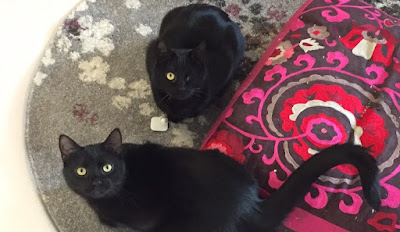 I also picked up some cat beds at the Ithaca TJ Maxx store, as they often have really nice beds for good prices. They did not disappoint, and even are carrying a line of beds marketed by HSUS. They were under $15 each, and really cute, so I picked up two. 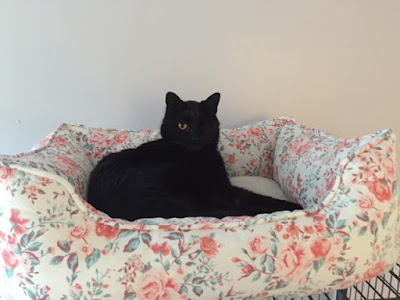 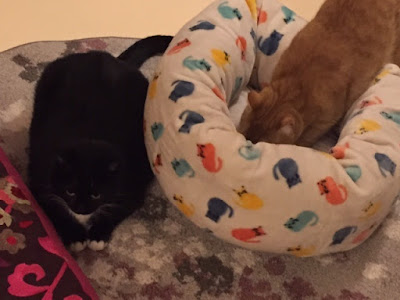 As usual, I'm behind on posts. I have so many people to thank and so many changes and cat stories to add.