Lupé is a community cat living in Van Etten. Her caretakers had made arrangements to get her altered, and I lent them a trap to pre-bait and catch her. True to Murphy's Law, she failed to show the day before her surgery, and missed her appointment. A new appointment was made.

However, a few days later she presented her caretakers with these two little gems: 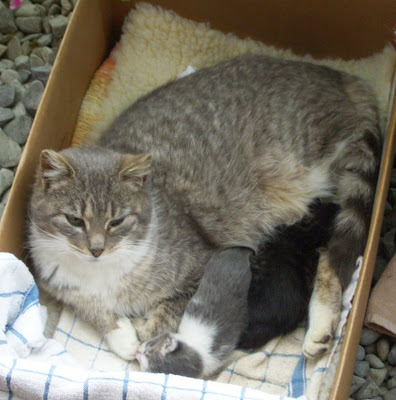 Too late! Once she can be away from her kittens for a day, we'll get her to a veterinarian for FeLV/FIV testing so we can promote these cuties and hopefully get them pre-adopted so they can go straight into homes once they are ready to go. Her caretakers have her shut in their greenhouse where she is snug and warm.
No comments:

She also has stopped eating, sleeping with me, or taking any interest in anything. She just sits on the couch in the great room and stares at the upholstery. 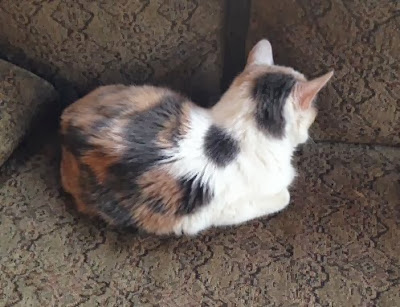 When the weather got nice I let her out on the catio, as she has been begging for. She went outside and howled and howled like she had been when looking for him in the house. Then she came back in, and it was like she had given up. She just went to the couch and only budges to go to the cat box. She won't even lay on the soft blanket there. She just lies on the bare cushion.

I did cook her some chicken. She had a few bites of that last night. That's the last thing she ate on her own. Baby food...nope. A/D. Nope. So I've resorted to syringe-feeding her. 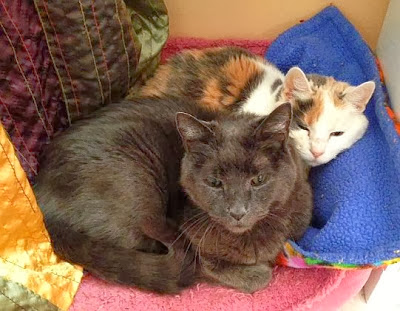 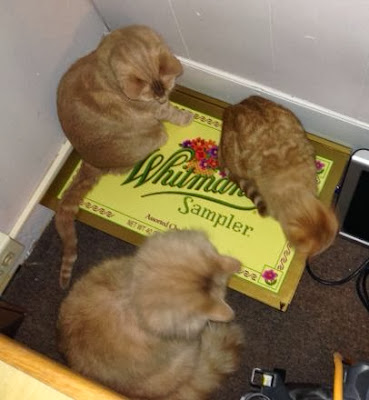 Last night I was working upstairs on the computer (as I am now) and I hear a loud buzzing like a horsefly. I ducked away, and the cats all ran after it. Thinking it might be a wasp, I got up and headed over.

It was a good old stink bug, and the kittens were learning why you don't bite one. Yuck! They stared at it for a few moments and then stalked off.

I try to keep the furniture up here covered since it gets so little human use. Clearly I am failing. 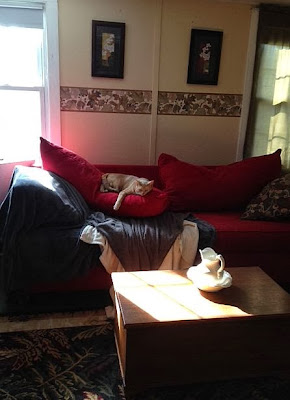 Bo has it rough, right?
No comments:

And he also still needs a home, along with his brother Davis. They are currently the "upstairs" cats. 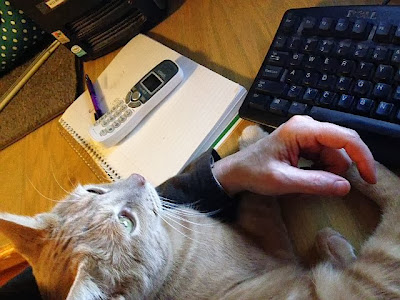 Meet Lucy and her sister

Somehow my phone number ended up on the Internet. The phone rang and it was a local number and I picked it up. I ended up with three cats from a nearby trailer park who were originally rescued from the feral population there, but the man who rescued them was moving to another trailer in the park, and also could not afford to get vaccinations and spay/neuter for three cats. Given that it would have cost around $600, I can sympathize.

I had all three cats transferred to us, and had the male (a cute friendly tiger with white) altered and vaccinated, but then the temperature plunged and I had no space for him without heating additional space in the barn. I called the original owner and his sister, who had expressed interest in keeping him, agreed to take him back.

But the two little girls are here to stay. Here is Lucy, who is a little treat hound and is coming around nicely: 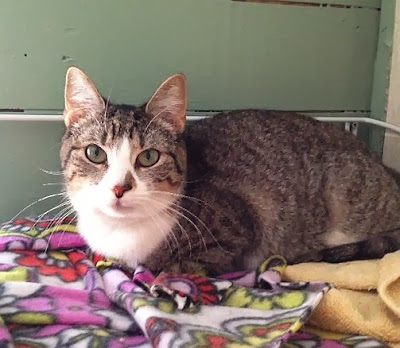 Here is her little sister, who doesn't have a name, primarily because she spent all of her time hiding. And she still does here, too: 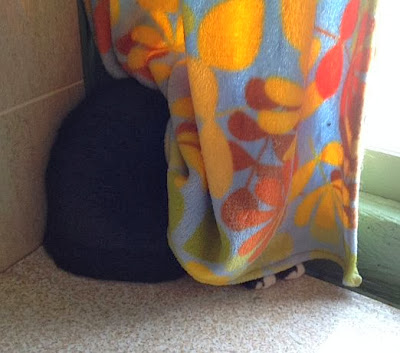 I have to think of just the right name for her. She doesn't have a mean bone in her body. I can pick her up and she just shivers, but doesn't scramble, bite, or scratch. She has a cute little face, but a long way to go before she is adoptable: 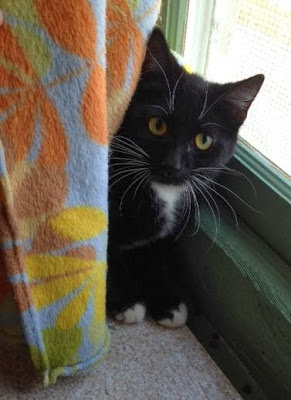 So that's how it goes. Two get homes, and two come in.

Actually three, because little Hope is coming back. More on that tomorrow.

Arthur checks in, too!

And speaking of relaxed...I think it is clear that Arthur is really relaxed in his new place. 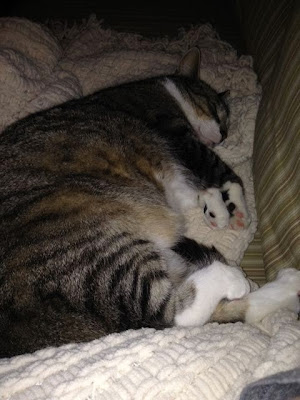 Now I get photos by text, too. It's kitty feedback, 24 hours a day. Gotta love it.
2 comments: 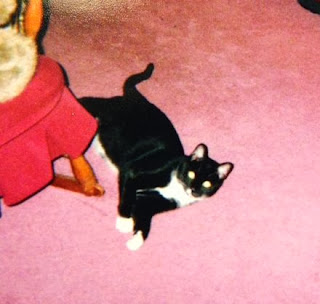 It has been so long since someone has sent me an actual photo in the mail I wasn't quite sure what to do with it! TinyCat clearly is relaxed in his new home. Remember everyone, I love photos. I'm not always so good about getting them all up, but I try! I'll try even harder, because I love having these permanently in the blog.
No comments: 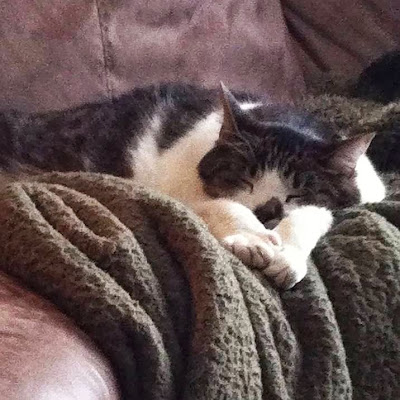 Actually, I stole her photo off Facebook. Here's her kitten shot.
No comments:

It used to be every day. Now it's about every other day. Cricket is certain I've left Ivan on the porch or the catio, or he's somewhere she hasn't checked. I would have thought Nellie would have been the cat who missed him most, but Cricket is disturbed she can't find him, and hops around the house, from door to door, to cat-box room, to all the sleeping spots, just in case.

We all miss him.
2 comments:

Command central gets a makeover

I normally communicate about cat rescue using a economy laptop I purchased earlier this year. But all the "guts" of my rescue and paying-job communication lives upstairs on an old Dell tower CPU that I inherited when the company I work for was first sold to a larger corporation. They sent us new laptops at that time, and no one wanted to old stuff, so it became disenfranchised, and therefore our own. My
Dell therefore became my communication drone.

Every now and then I go up there to dust everything off. Modem, router, phone base, cell booster, monitor, etc. You'd think that would be enough right?

Oh, no. Because I have cats!

Every now and then...no wireless. Why? A cat has stepped on the "off" button on the battery backup.

Now and then, I hear a crash upstairs. A cat has knocked down one of my garage-sale speakers. I go back up and prop things up again. Wires get tangled.

A cat chews through the skinny cord on the router. No wireless. Buy new router. New router wire goes over old wires. Wires get more tangled.

Cat knocks down power surge protector. I pick it up and cram it back behind the CPU to make it more secure. Wires become more tangled.

You get the drift.

It got so I hated to even look at it. I had small panic attacks anytime I walked up the stairs. 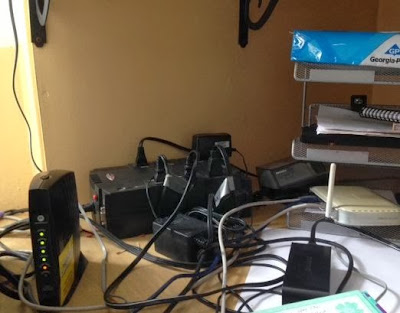 If this looks not-so-bad to you, it's because I was too embarrassed to show you the worst.
I used to have a very nice monitor (expensive! flatscreen!) but after 6 years of hard use it slowly began to flicker to the point I could no longer tolerate it. A few months ago I dragged out my old huge warhorse of a monitor that weighs about half as much as I do, and I've tried to use that instead. However the cats like lying on it and looking out the window so, you guessed it, I experience even more cat-related outages.

I finally decided all these little stressful things had to go, one by one. So yesterday I went on an economy shopping trip looking for a cheap, thin, flat-screen monitor (Acer, $79, Staples, SCORE!) and some clearance items to help protect my equipment and wires. I'll let you know in 60 days whether I was successful or not. 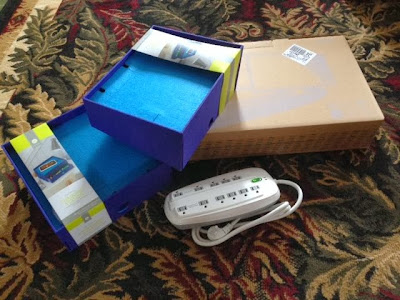 As you can see, Davis is already looking for ways to seek and destroy even as I clean up (Yes, I still need to finish painting back there). 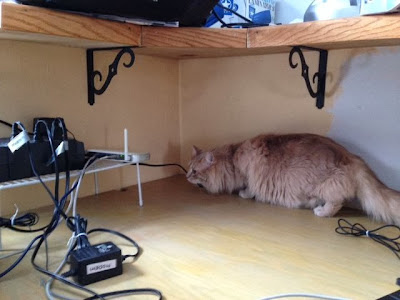 You know how they tell you to plug in first A, then B, then C, etc? The heck with it. I got so frustrated I just turned everything off, unplugged it all, swore at the wires as I attempted to get them in some sort of order, plugged them all back in, and turned everything back on.

And here I am. Still. Knock on wood.

Arthur gets a home! 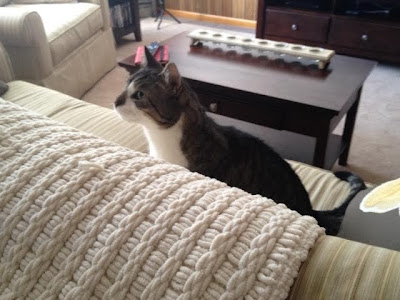 Arthur in his new living room.
After being here five, yes five, long years, Arthur has finally scored a home of his own. People have been interested in him various times, but have always been distracted by another cat or kitten. Arthur is a big cat with a huge personality. He finally found a place that values him for exactly that!

He is living with his new mom and a corgi named Sausage, down in Athens PA. He did a week of "pre-adopt" to make sure he and Sausage would get along. Arthur never thought much of my Molly dog, but apparently he is less offended by bigger dogs who aren't as wiggly as Molly is, because he and Sausage seem to be doing OK. Arthur came back after his pre-adopt week for a dental (one extraction and some tarter), and back to his new home he went!

He has his own room, and even a little electric fireplace. Sausage isn't into getting up on furniture, so it looks like the upper cushy level of the home will be Arthur's exclusive domain.

He's a very lucky cat, and he deserves it after waiting so long! Thank you, Shelly, for adopting him!