The very worst thing that could ever happen while I was away on work travel finally happened: one of my cats died.

When I saw Donna's name pop up on my ringing phone, I was sure a cat had passed or was in serious difficulties. Donna has always handled past problems and near disasters with a message via Facebook or an email. Usually she has resolved them before I've gotten back to her. If she rings the phone, its going to be because something over-the-top had occurred.

Sweet Gawaine, perhaps one of the most adoptable cats in the cat facility (although a bit shy at first with strangers) had died without warning while she was playing with him with the laser toy. He's not manic about the toy--he was just patting at the dot with his paws, when suddenly he fell back on his haunches, turned and bit at his hind leg (blood clot?), yelled, and died. His buddy Arthur was out with him and apparently was very upset by Gawaine's cry. Donna immediately checked Gawaine,realized he wasn't breathing at all, and called me. 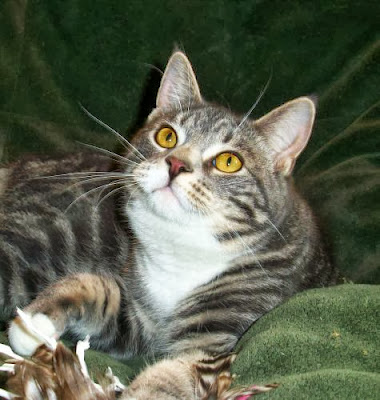 Best guess, given the way he passed, Gawaine suffered from hypertrophic cardiomyopathy According to the article "Hypertrophic cardiomyopathy tends to affect cats 1 to 5 years of age." Gawaine was just over two, and all of the other cats that have belonged to adopters or friends who have passed in a similar way have been around the same age. Also, I had a veterinarian who specializes in cats right with me in Chicago, and he said that sounded classic.

I've only had one other adopted cat suffer from the problem (to my knowledge). Luckily he survived his cardiac event and was doing well with medication, the last time the adopter checked in.

Gawaine was such a sweet boy. He really used to be quite shy, but since he has been hanging with Arthur (who doesn't get along with any other cats) he has really come out of his shell. He has been "second choice" a few times with adopters, but never got his chance for a home of his own.